Tiny 'Nanoneedles' Could Help Your Damaged Organs Repair Themselves 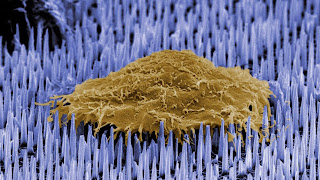 In a trial involving mice, an international team of researchers used microscopic "nanoneedles" to coax the body into generating new blood vessels. Applied to humans, the technology could eventually be used to get organs and nerves to repair themselves.
Researchers from Imperial College London and the Houston Methodist Research Institute used the nanoneedles to deliver nucleic acids — the building blocks of all living organisms and transmitters of genetic information —to a specified area. Once delivered to a cell or tissue, the nucleic acids do their work by regenerating lost function. The researchers, a team led by Ciro Chiappini and Molly Stevens from the Imperial College London, describe their findings in the latest issue of Nature Materials.
Rest the rest of the article at io9.
Posted by George at 3/31/2015