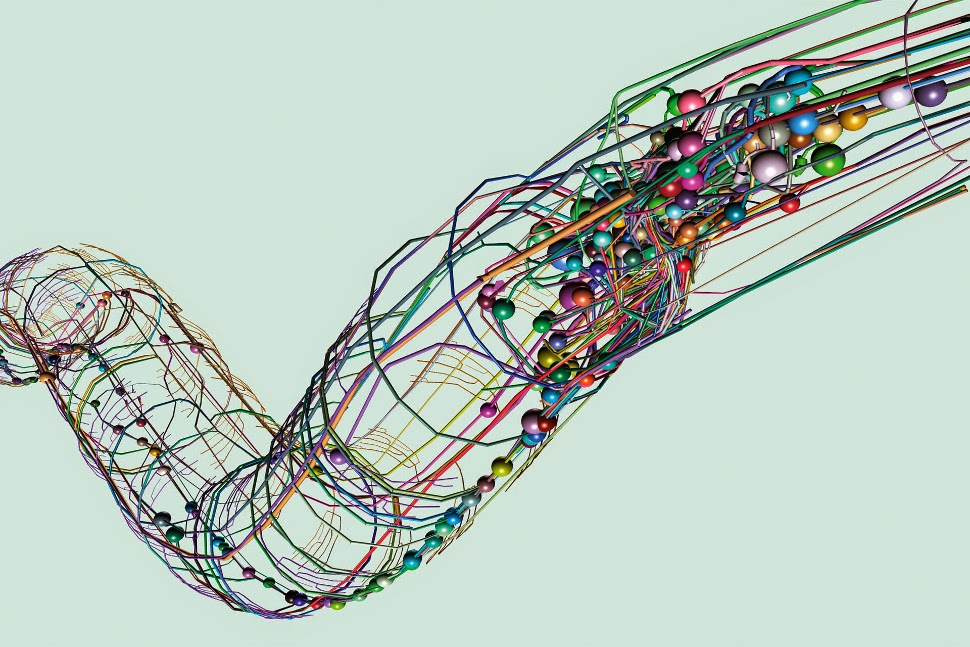 Animals are exceptionally complicated things. So complicated, in fact, that we've never actually built one ourselves. But the day is fast approaching when we'll be able to create digital versions of organisms on a computer — from the way they move right through to their behaviors. Here's how we'll do it.
I spoke to neuroscientist Stephen Larson, a co-founder and project coordinator for the OpenWorm project. His team is busy at work trying to create a digital version of an actual nematode worm in a computer.
But before we get to our conversation, let's do a quick review.

The Path To Virtual Organisms

To be fair, scientists have already created a computational model of an actual organism, namely the exceptionally small free-living bacteria known as Mycoplasma genitalia. It's an amazing accomplishment, but the pathogen — with its 525 genes — is one of the world's simplest organisms. Contrast that with E. coli, which has 4,288 genes, and humans, who have anywhere from 35,000 to 57,000 genes.
Scientists have also created synthetic DNA that can self-replicate and an artificial chromosome from scratch. Breakthroughs like these suggest it won't be much longer before we start creating synthetic animals for the real world. Such endeavors could result in designer organisms to help in the manufacturing of vaccines, medicines, sustainable fuels, and with toxic clean-ups.
There's a very good chance that many of these organisms, including drugs, will be designed and tested in computers first. Eventually, our machines will be powerful enough and our understanding of biology deep enough to allow us to start simulating some of the most complex biological functions — from entire microbes right through to the human mind itself (what will be known as whole brain emulations).
Needless to say we're not going to get there in one day. We'll have to start small and work our way up. Which is why Larson and his team have started to work on their simulated nematode worm.

To kick off our conversation, I asked Larson to clarify what he means by "simulation." How is it, exactly, that biological attributes can be translated to the digital realm?
"At the end of the day, biology must obey the laws of physics," he responded. "Our project is to simulate as much of the important physics — or biophysics — of the C. elegans as we can, and then compare against measurements from real worms. When we say simulation, we are specifically referring to writing computer programs that use equations from physics that are applied to what we know about the worm."
This, he says, is what's allowing them to predict what its cells are doing and how they add up to the overall physiology and behavior of a worm.

But why C. elegans?
"This tiny worm is by far the most understood and studied animal with a brain in all of biology," he says. "All of the ~1,000 cells of this organism have been mapped, including a tiny brain composed of 302 neurons and their network composed by give-or-take 5,500 connections."
Additionally, Larson says that three different Nobel prizes have been awarded for work on this worm, and it is increasingly being used as a model to gain an enhanced understanding of disease and health relevant to all organisms, including humans.
"When making a complex computer model, it is important to start where the data are the most complete," he says.

We also talked about the various attributes of the worm they're trying to digitize. Given that they're also trying to simulate its brain, I wondered if their project is aimed more at emulation than simulation.
"We are currently addressing the challenge of closing the 'brain-behavior loop' in C. elegans," he says. "In other words, through this simulation we want to understand how its proto-brain controls its muscles to move its body around an environment, and then how the environment is interpreted by the proto-brain. That means leaving aside reproduction or digestion or other internal functions for now until that first part is complete. Once we get there, we will move on to these other aspects.
As for the emulation versus simulation distinction, Larson says that, when it comes to brains, he's seen the two terms used interchangeably: "I'm not sure there is a meaningful difference."
On this point I actually disagree. A simulation seeks to recreate an approximation or appearance of something, whereas an emulation seeks to recreate de facto functionality. So, if the Open Worm project is successful, and the brain of a nematode worm perfectly recreated in the digital realm, we'd be talking about an emulation and not a simulation. This is an important distinction from an ethical perspective, because there's the potential for harm, and consequently, moral consideration.

Larson, who has a bachelor of science and master of engineering from MIT in computer science, along with a Ph.D in neuroscience from the University of California, San Diego, also told me about some of the challenges they're facing.
"Despite being the best understood animal, there are still aspects of this worm on the frontier of our understanding of biology as a whole that biologists in this field do not have complete data for, and this obviously limits us," he told io9.
For example, he described to me how neuroscientists have made progress by poking a sharp glass electrode into a neuron from a mouse or rat to analyze neuronal electrical behavior.
"However, this is much more difficult to do in worms so it hasn't been done as much, and as a consequence there is not as much data present," he says. "However, recently scientists are using breakthroughs in optical imaging of neuronal behavior and laser control of neurons to catch up to the last 50 years of understanding neurons in rodents."
Larson says there's an explosion of data on its way and they're doing their best to collect as much insight from this work so that they can build these neural behaviors into their model.
"We can also use some clever tricks from computer science to help us fill in some of the gaps," he adds. "The good news is that this will only get easier as the tools and techniques get better over time."
Speaking of tools, the Open Worm team is utilizing modern programming languages like Java, Python, C++, and related technologies. They're also using a lot of cutting edge open source libraries across all these languages. And for organizing themselves online, they've been using GitHub, Google Drive, and Google+ Hangouts.

"We've spent the last three years making these two elements as accurate as possible," he told me. "Late last year we were pleased that we got the part dealing with the body, muscles, and environment to do a simple 'wiggle.' Even this extremely simple behavior was exciting because it showed proof of concept — we could create a sophisticated simulated C. elegans body that we could eventually do sophisticated brain-behavior in silico experiments with.
Looking ahead, the team is working on a few different areas based on the interests of their contributors
"We are refining a published data set of real worm behaviors into a form where we can automatically compare our model to real data," he says. "We are connecting the body model to the nervous system model."
They're also working to make all of it more accessible to the internet via the web.

One of the more exciting aspects of this project is the open source nature of it all. Larson says that every line of code produced by the project is shared on GitHub as it is written, meaning that anyone in the world can watch as they assemble the simulation.
"Our roadmap is open too, so anyone can see where we are going and participate," Larson told io9.  "We also hold scientific discussions online that you can see on our YouTube channel.  Essentially we try to invert the weakness of not being able to meet in person very often into a strength of transparency in our communications over the internet."
The Open Worm team is also launching a Kickstarter campaign (launching April 19).
We're raising money to enable us to put the simulation — which we're calling a WormSim for simplicity — up online and accessible through your web browser," he says. "This will make the experience of seeing the results of OpenWorm much more tangible for folks because they'll be able to explore the activity of the model in a 3D virtual world for themselves. Today we have more static representations of the worm we have already put online and these are already being used by scientists around the world."

A Template For the Future

Encouragingly, the Open Worm approach to simulating an organism could easily translate to similar projects. Indeed, they've already received inquiries from groups who are doing related projects on fruit flies and ants to explore collaborations.
"We hope that what we do here in C. elegans will create a template that can be used for other organisms, but for the moment we're sticking with showing that this way works first.
Images: openworm.org