The Real-Life Science Behind Orphan Black 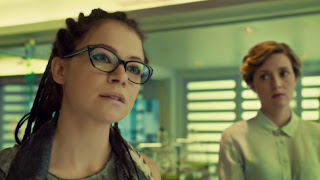 In addition to being incredibly entertaining and provocative, the popular Orphan Black series is absolutely teeming with science. From human clones and genetic engineering through to DNA barcodes and genetic patents, here's what you need to know about the science behind the show.
For the uninitiated, Orphan Black is a conspiracy thriller that stars Tatiana Maslany as several human clones. Uncertain of their true origins, the clones struggle to evade the unscrupulous Dyad Corporation as they try to learn more about their past.
And to the show's credit, the writers — with the help of science advisor Cosima Herter — get much of the science right. There's too much to cover in a single article, so we boiled it down to four main topics: human cloning, genetic engineering, the viability of the show's timeline, and the issue of genetic patenting.
Read the rest of the article here.
Posted by George at 3/31/2015