10 of the Weirdest Futurist Scenarios for the Evolution of Humanity 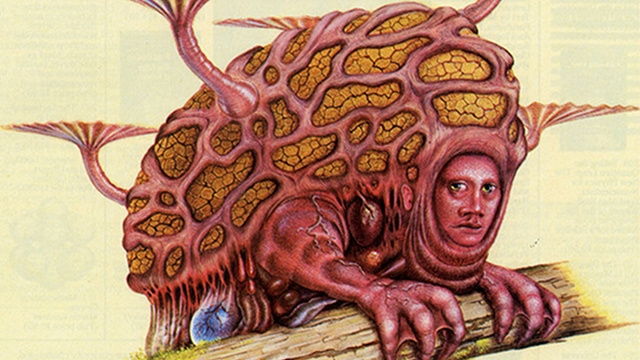 When science fiction writers and futurists imagine humans of the far future, they never think our descendants are going to look exactly the same as we do now. After all, we'll have access to powerful tools to turn us into cyborgs and hack our DNA, so there's no limit to how we could reinvent ourselves.
But just how weird could our progeny become? Here are 10 of the absolute strangest visions of our post-human future.
Top illustration drawn by Dougal Dixon and taken from a 1980s issue of Omni Magazine about what humans might look like in 50 million years.

1. Voluntary devolution
What better way to start a top 10 list of the weirdest visions for humanity than by considering the possibility that we take a massive step backwards rather than forward? Voluntary devolution is the idea that we should re-engineer the human species to the point where we're no longer advanced enough to be considered human. The basic premise here is that humans basically suck, and we should take it upon ourselves to regress, from an evolutionary standpoint, to a state of harmlessness. By becoming pre-civilizational, we would stop being a threat to ourselves, the animal kingdom, and the planet itself. This perspective could be interpreted as a kind of oxymoronic uber-Luddism, where progress is measured not by the increase and refinement of human capacities, but instead by its regression. The ultimate goal would be the end of civilization and our return to the jungle.

2. Voluntary human extinction
But why stop there when you can eliminate the human species altogether — and better yet, do it in such a way that everybody buys into it? Such is the goal of the Voluntary Human Extinction Movement (VHEMT), an activist movement that is actively working to phase out the human species, by asking us (very politely) to stop breeding. Armed with the slogan, "May we live long and die out," VHEMT's eventual goal is to return the Earth to its natural, healthy state. With humanity gone, all the remaining creatures on Earth could be free to live, die, and evolve on their own. Adherents of the voluntary human extinction model maintain that they're not misanthropic, they're just providing an "encouraging alternative to the callous exploitation and wholesale destruction of Earth's ecology."

3. The rise of the eco-human
Some environmentally conscious futurists aren't content to see humanity devolve or wither away into extinction — but they're also not convinced of our ability to address climate change and other ecological disasters. The solution to such problems, they argue, is to have humans voluntarily modify ourselves, to better live in harmony with the planet. In a paper titled "Human Engineering and Climate Change," philosophers S. Matthew Liao, Anders Sandberg, and Rebecca Roache make the case that humans should resort to such measures as pharmacologically induced meat intolerance (since meat production is exceptionally hard on the environment), genetically engineering cat-eyes to reduce our need for lighting, and reducing our physical size to lessen our ecological footprint (they recommend a 21% reduction in body mass for men, and 25% for women). They're also hoping to see us increase our will-power, which they argue will have the peripheral effect of improving our feelings of empathy and altruism.

4. Transgenic humans
But, why limit ourselves to adding a few new traits, when we can borrow wholesale from the animal kingdom? Transgenic technologies, which allow for the genetic intermingling of human and animal characteristics, could allow for a nearly endless array of human-animal hybrids. There's plenty to envy among our non-human friends, too: Dogs hear and smell much better than we do, cats can see in the dark, some primates have better memorization skills than us, and birds have remarkably strong vision. Looking ahead to the day when we can apply transgenic modifications to ourselves, many would-be transhumans would like to acquire the eyes of a hawk, the scales of a lizard, or the seaworthiness of cetaceans — imagine being able to swim alongside a pod of bottlenosed dolphins.

5. All brain, and no brawn
This is the classic vision of a humanity that has evolved a massive brain at the expense of its body. In his obscure 1893 story, "The Man of the Year Million," H.G. Wells posited the idea that humanity's dependence on technology will ultimately result in a decreased reliance on the body, and more on the brain. Even the simple knife and fork, argued Wells, would eventually make the human jaw redundant. Modern conveniences like motorised transportation woud result in the withering away of legs, torsos, and practically all muscles — so our descendants would essentially become huge brains that walk around on their hands. But just how realistic is this vision? According to Darwinian principles, physical characteristics will in fact start to disappear if they're not continually reinforced by selectional pressures. The human appendix is a prime example — a classic case of "use it or lose it." As for massive, bulbous craniums like the ones displayed by theTalosians of Star Trek, that's probably unlikely, given that brain size is not correlated with intelligence, and the fact that we're progressively offloading our thinking to external devices. That said, American heads are getting bigger.

6. The Hive Mind
The hive mind, as portrayed by the insectoid-humans of Frank Herbert's Hellstrom's Hive or the infamous Borg of Star Trek, is a possible future state in which human social organization has taken on the form of a superorganism much like ants or bees. In such a state, individual human will is largely trumped by the demands of the collective, or some kind of overarching central intelligence or modus operandi. The totalitarian experiments of the 20th century were prototypes of this idea, mercifully limited by the primitiveness of their technologies. But looking to the future, it's easy to imagine the frightening prospect of renewed state efforts to control the thoughts and actions of the populace — using such things as ubiquitous surveillance and mind-controlling technologies (like nanobots or cyber-brain hacking). But an emerging hive mind could also be seen as a positive step forward in human communication and social organization — what some have referred to as the global brain or Noosphere. The big question to ask, however, is how much of the individual can be retained in an open sea of competing conscious thoughts?

7. Postgendered humans
Advanced reproductive and cybernetic technologies will have a profound impact on our biological nature. Currently bound by sexual reproduction, we are a binary species, consisting of females and males. But given the potential for cyborgization and such developments as exosomatic wombs, we may cease to become biological organisms in the traditional sense. Future humans, or what would really be posthumans at this point,could choose to be postgendered in the sense that they wouldn't be tied to one particular biological sex, instead acquring the best characteristics that each has to offer (a kind of technologically-enabled androgenization). Future humans could also choose to discard gendered traits altogether and become asexual. Even more radical is the possibility of creating brand new biological sexes, or amorphous gendered traits that could be altered on the fly.

8. Out of control morphological arms races
Assistive reproductive technologies like genomics will allow future couples to partake in the practice of human trait selection, or what is more commonly referred to as "designer babies." It's also possible that advanced somatic gene therapy will allow individuals to modify and enhance their genetic constitutions well after they're born. But a number of physical endowments could be used by people to gain an advantage in certain domains, thus instigating a kind of "arms race". Take sports, for example. Basketball players are competing for height, while swimmers are competing for the length of their limbs. Today, athletes have to come by these characteristics naturally, but in the future, those looking to gain a physical edge could take the extra step of seeing their genome modified to suit (or by parents hell-bent on seeing their child succeed at a particular sport). The modifications could exceed anything seen before by nature, leading to some bizarre and extreme physical forms.

SEXPAND
9. Humans modified for space
It's no secret that humans in their current form have no business being in space. The long term effects of zero gravity and solar radiation make it a poor environment for the fragile creatures that we are. But this hasn't stopped some from speculating about how humans could be modified to withstand the rigours of space — and their solutions are anything but subtle. Nanotechnology expert Robert Freitas has outlined a plan for the elimination of lungs, making breathable air unnecessary. Ray Kurzweil has speculated that future humans won't require food, equipped instead with nanobots that can energize our cells. And even Craig Venter has chimed in, putting out the call to develop an advanced inner ear that can allow people to escape motion sickness, genes for bone regeneration, and DNA repair for radiation He's also suggested that we develop a small stature, higher energy utilization, hairlessness, and slower skin turnover. And yet others have speculated about transforming humans into gangly octopus-like creatures who would be far more adapted to slithering around in zero gravity environments.

SEXPAND
10. Uploads
While the idea of uploading human consciousness into a supercomputer is weird unto itself, some of the visions of life after uploading are even weirder. Take Hansonian Uploads for example — the suggestion that uploaded minds might take it upon themselves to create virtually unlimited copies of themselves in order to compete in tough economic markets. Driving this suggestion is the suspicion that copying yourself will be fast and cheap, resulting an explosion of uploads. Another scenario could see an uploaded mind adjust its relative clock speed. With an agonizingly slow clock speed, for example, an uploaded mind could literally watch the unfolding of geological-scale events like the rising and falling of mountains. Uploaded minds could also hop from robotic body to robotic body, forever changing their real-world physical form. Another fascinating possibility could come in the form of altering the fundamental parameters of the computer-generated environment. This could result in something far beyond human comprehension, both in terms of the physical space (like adding dimensions or changing the physics of the environment) and the nature of psychological and subjective awareness itself.
This article originally appeared at io9.
Top image composed by Dougal Dixon. Inset images via (1) RedIce, (2) VHEMT, (3) Ecoliteracy, (4) StarTrek.com, (5) FutureMan, (6) Vegans of Color, (7) New York Fashion, (8) andrie-basket (Bol Manute) (9) Dougal Dixon, (10) FutureTimeLine.
Posted by George at 3/29/2013