My animal uplift paper has been published in JET

A paper that I wrote in support of my talk at the IEET's 2006 Human Enhancement Technologies and Human Rights conference has been published in the Journal of Evolution and Technology (JET):

All Together Now: Developmental and ethical considerations for biologically uplifting nonhuman animals 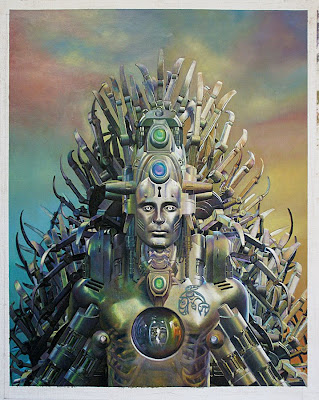 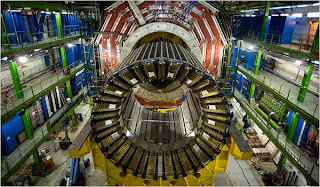 Before you read this post you might want to brush up on the whole quantum immortality argument.

Okay, you know how the Large Hadron Collider had to be shut down because of of a helium leak? Well, what if this is evidence that we're about to witness a successive chain of events that will result in the LHC never having the opportunity to destroy the Earth as we know it?

It's a classic case of anthropic principle meets the Many World Hypothesis. We can't observe our non-existence; we can only observe our ongoing existence, no matter how improbable or absurd.

Given that the LHC was only recently ignited, can we already make this inference?

Well, leave it to Anders Sandberg to crunch the numbers and do an analysis: "Bayes, Moravec and the LHC: Quantum Suicide, Subjective Probability and Conspiracies."

And it looks like Eliezer Yudkowsky and friends are having a similar conversation at Overcoming Bias.

Quick summary of their opinions: We can't jump to this conclusion. Yet.
Posted by George at 9/22/2008 5 comments:

Email ThisBlogThis!Share to TwitterShare to FacebookShare to Pinterest
Labels: humor

I will be taking part in a Cafe Scientifique panel hosted by the Ontario Science Centre on Saturday September 20. 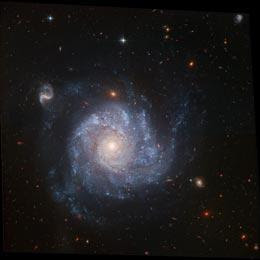 Transhumanism is not a form of social Darwinism

While funny and undoubtedly tongue-in-cheek, this comic gets it all wrong about human enhancement and its relation to social Darwinism: 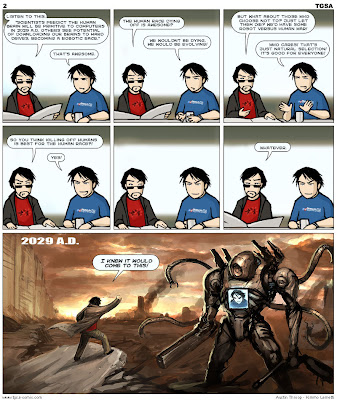 Click for larger version.
Rather, transhumanism should be seen as a force for social justice, egalitarianism and a means to reduce human suffering. And of course, as a way for people to experience life at its maximum potential.
Posted by George at 9/09/2008 5 comments:

The upcoming video game features an entire suite of music production and editing tools that were developed during the past 40 years, including MIDI (both for triggering and recording data), tone generation, digital effects, sequencing, looping, arpegiation, and even a DAW-like interface a la Cubase or ProTools.

Check out the demo for GH4:


No one would have ever predicted that these music technologies would eventually be used in video games -- and that's what makes technological convergence so exciting and scary at the same time.

Stanley Schmidt, author of The Coming Convergence and editor of the science-fiction magazine Analog, has shown that convergence can lead to disaster. He claims that our ability to construct skyscrapers, along with the rise of mass air transport, arguably paved the way for the tragedies of 9/11. Again, an outcome that couldn't have been reasonably predicted.

More optimistically however, converging technologies could also improve things in a very dramatic way -- particularly in the sphere of human performance. This is the so-called NBIC convergence which would involve the synergistic effects of molecular nanotechnology, biotechnology, information technology, and cognitive technology.

I've posted a new poll about energy drinks (see right sidebar). Use this post to make comments.
Posted by George at 9/07/2008 6 comments:

What are the must-read transhumanist/futurist books of the past 5 years?

A question for my readers: In your opinion, what are the most important books about transhumanism (i.e. human enhancement) and/or futurism in general that have been written in the past 5 years?

Please use the comments section below to share your picks.
Posted by George at 9/04/2008 12 comments: