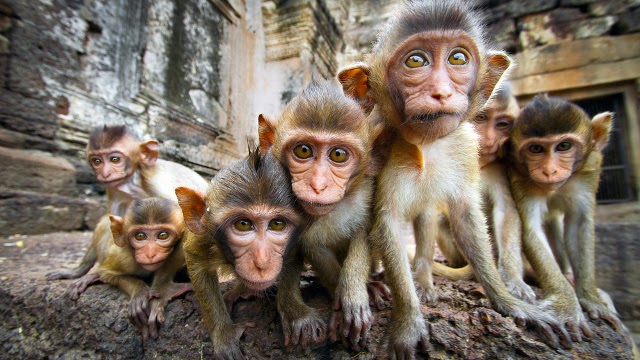 Looking to create more accurate experimental models for human diseases, biologists have created transgenic monkeys with "customized" mutations. It's considered a breakthrough in the effort to produce more human-like monkeys — but the ethics of all this are dubious at best.
Yup, scientists know that mice models suck. Though they're used in nearly 60% of all experiments, they're among the most unreliable test subjects when it comes to approximating human biological processes (what the hell is an autistic mouse, anyway)?
Great apes, like chimpanzees and bonobos, obviously make for better test subjects. But given how close these animals are to humans in terms of their cognitive and emotional capacities, they're increasingly being seen as ethically inappropriate models for experiments. Indeed, medical experiments on apes are on the way out. There's currently a great ape research ban in the Netherlands, New Zealand, the United Kingdom, Sweden, Germany, and Austria (where it's also illegal to test on lesser apes, like gibbons). In the US, where there are still over 1,200 chimps used for biomedical research, the NIH has decided to stop the practice.

Monkey in the Middle

Regrettably, all this is making monkeys increasingly vulnerable to medical testing. Given that they're primates, and that their brains and bodies are so closely related to our own, they're the logical substitute. But it's for these same reasons that they shouldn't be used in the first place.
Making matters worse, researchers are now actively trying to humanize monkeys by using gene-editing technologies, specifically the CRISPR/Cas9 system. In the latest "breakthrough," Chinese researchers successfully produced twin cynomolgus monkeys with two separate mutations, one that helps regulate metabolism, and one involved in healthy immune function.
For the most part, these monkeys are okay (setting aside the fact that they're lab monkeys who will experimented upon for the rest of their lives). But it's an important proof-of-concept that will result in more advanced precision gene-editing techniques. Eventually, researchers will be able to create monkeys with more serious conditions. More serious human conditions — like autism, schizophrenia, Alzheimer's, and severe immune dysfunction.
"We need some non-human primate models," said stem-cell biologist Hideyuki Okano in a recent Nature News article. The reason, he says, is that human neuropsychiatric disorders are particularly difficult to replicate in the simple nervous systems of mice.
That's right — monkeys with human neuropsychiatric disorders.

Speaking of that Nature News article — and I'm not trying to pick on them because many science journals tend to gloss over the ethical aspects of this sort of research — their coverage of this news was utterly distasteful, to say the least. Here's how they packaged it: 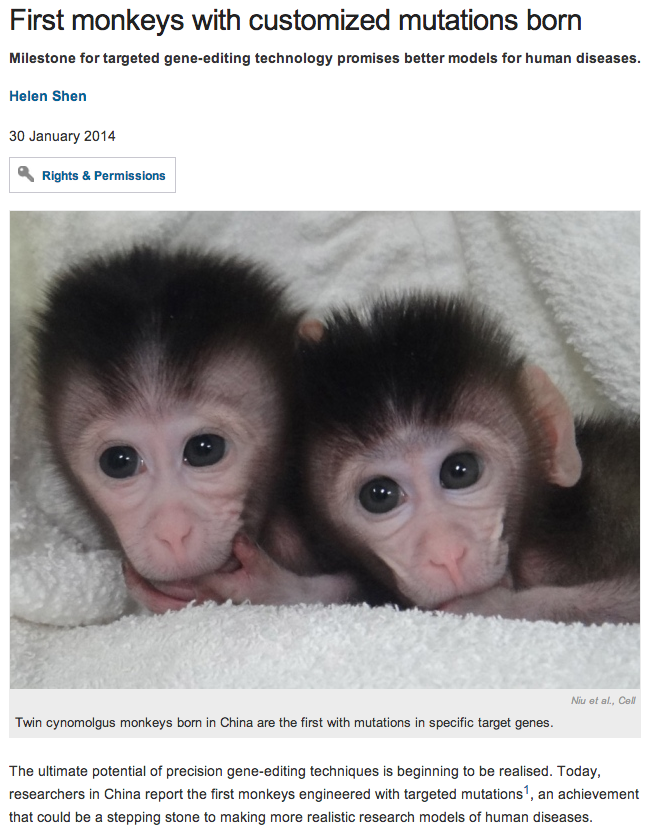 Awww, so adorable. Let's gush over how cute they are, but then talk about how psychologically deranged we're going to make them.
Thankfully, this breakthrough comes at a time when it's becoming (slightly) more difficult for scientists to experiment on monkeys. Back in 2012, United Airlines announced that it would stop transporting research monkeys — eliminating the last North American air carrier still available to primate researchers. Moreover, there are other options for scientists when it comes to research.
In closing, and in the words of animal rights advocate Peter Singer, "Animals are an end unto themselves because their suffering matters."