What is the purpose of the Universe? Here is one possible answer. 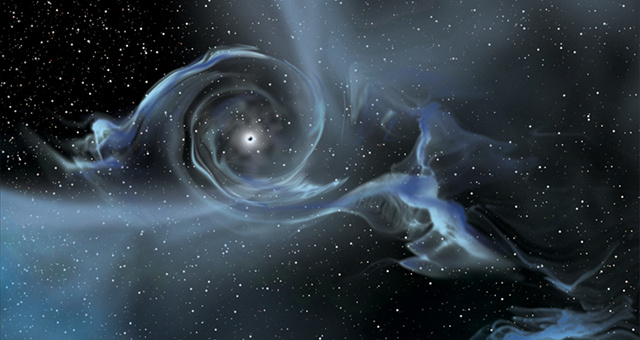 It’s often said that Jupiter — or any gas giant for that matter — is a failed star. This sentiment riles a lot of people, who bristle at the suggestion that Jupiter is deficient somehow, or that it was even meant to do something in the first place. But the conjecture belies a larger, more important question. What is it, exactly, that the universe and all the stuff that’s in it supposed to do aside from just floating in space?
Well, it just so happens that there is a theory that gives a kind of raison d'etre to our universe and all the objects flying through it. If true, it would mean that our universe is nothing more than a black hole generator, or a means to produce as many baby universes as possible. To learn more, I spoke to the man who came up with the idea.
It's called the theory of Cosmological Natural Selection and it was conjured by Lee Smolin, a researcher at the Perimeter Institute for Theoretical Physics and and an adjunct professor of physics at the University of Waterloo.
"It's a scenario that explains how the laws of nature are chosen," Smolin told me, "and if true, these parameters are geared to maximize the number of black holes made in the universe."
Of cosmological singularities and baby universes
Indeed, black holes — and the cosmological singularities they produce — are central to Smolin's theory. These are regions of space-time where the quantities used to measure gravitational fields or temperature become infinite. It's also where general relativity stops being useful, making any kind of prediction impossible. Classical general relativity says that a singularity exists inside each black hole. But both string theory and loop quantum gravity suggest that black hole singularities can be eliminated — and when this happens, it may be possible to describe the future evolution of the space-time region within it.

"Everything that falls into a black hole doesn't just hit the cosmological singularity and just stop evolving so that time simply comes to an end," he says, "Time continues and everything that fell into the black hole would have a future where the singularity was, and that region is what we call a baby universe."
Moreover, Smolin says these baby universes are immune to whatever happens in the parent universe, including eternal inflation and its ultimate heat death.
"Black holes are predicted to evaporate by making radiation — what's called the Hawking Process," he says, "but only until they get down to an equilibrium with the temperature of the cosmic microwave background." This process, says Smolin, has to do with the properties of the horizon — and it's only the horizon that evaporates.
"The baby universe may come into a kind of contact with the original universe in a way it didn't before, but whether this happens or not depends on the details of the quantum gravity theory," he says.

And like Darwin's theory of variation and selection, Smolin also surmises that baby universes are slightly different than the parent who spawned them. In turn, this cosmological "mutation" — in which the parameters of nature have been slightly modified — may result in a new universe that's either better or worse in terms of its replicative ability.

For example, if the cosmological constant and speed of light were slightly tweaked, or if the law of gravity became too weak or strong, the new universe could be suboptimal in its ability to make massive quantities of massive stars. In such a universe, matter might not be able to coalesce into stars, or galaxies might be unable to form.
In this model, a "fit" universe, therefore, is one that has evolved such that its ability to produce black holes has been optimized. And this may explain why we observe a universe that produces large swaths of giant stars — each one an attempt to make a baby.
The idea of cosmological variation, however, is one of pure conjecture. "It's an hypothesis," Smolin concedes.
But that said, Smolin points to string theory as a potential mechanism. "There could be a connection there," he told me, "it describes a landscape of different cosmological parameters — different phase transitions between them — and this is almost exactly the kind of example I had in mind when trying to explain the variation of the constants."
Smolin is also unsure how many baby universes each black hole is able to produce — though he suspects that it's one per black hole. "The answer," he says, "will ultimately depend on quantum gravity theory."

We asked Smolin if life in the universe is therefore an accident — that humans and all other organisms are mere epiphenomenon, a sideshow to a much larger process.
"If the hypothesis of Cosmological Natural Selection is true, then life — and the universe being biofriendly — is a consequence of the universe being finely-tuned to produce black holes by producing many, many massive stars."
But he added: "Those if statements are important."
Other scientists have conversely argued that the universe is freakishly biophilic — that the laws of nature appear to be geared towards making life. Some even suggest that this is the ultimate purpose of the universe — that it's fine-tuned to spawn biological organisms (the so-calledbiocosm hypothesis).

SEXPAND
Similarly, philosophers like to talk about the Anthropic Principle — the notion that any analysis of the universe and what happens within it must take into account the presence of observers (i.e. intelligent life). We're subject to an observational selection effect, they argue, which means we can only ever observe a universe that's friendly to life.
Smolin, on the other hand, brushes these lines of argumentation aside, saying that cosmologists should study and understand the properties of the universe in a way that doesn't connect it to life. The Anthropic Principle, he says, is simply incapable of making a falsifiable prediction for any kind of testable experiment.
At the same time, however, "Cosmological Natural Selection," he says, "is very capable of doing just that."
Moreover, the laws of the universe — and all the stuff that's within it — can all be explained without referencing it to life.
"It's not a coincidence," he says, "that we live in a world which has lots of carbon and oxygen in it, along with long list of suitable stars, and so on." The presence of these apparent life-friendly elements — like carbon and oxygen — has a perfectly good explanation outside of the biophilic paradigm. These elements, says Smolin, creates the conditions necessary for the efficient formation of sufficiently massive stars that form black holes.
The claims made as evidence by Anthropic Principle supporters, he says, can be explained in an alternative way.

Needless to say, Smolin's Big Idea has received its fair share of criticism. It's an extraordinary idea, after all, and extraordinary ideas often undergo extraordinary levels of scrutiny.
Cosmologist Joe Silk, for example, says the universe we observe is far from being an optimal producer of black holes. He speculates that other "versions" of the universe could do a much better job.
Similarly, Alexander Vilenkin argues that the rate of black hole formation can be improved by increasing the value of the cosmological constant. Smolin is wrong, he says, to hypothesize that the current values of all the constants of nature are perfectly adjusted to maximize black hole production.
Ruediger Vaas complains that Smolin's first mistake was to start making analogies to Darwinian processes. The fitness of Smolin's universes, he says, aren't constrained by their environments, but by the numbers of black holes. Moreover, although Smolin's universes have different replication rates, they aren't competing against each other — what he feels is a crucial component of any Darwinian process.
Writing in the Edge, Leonard Susskind — Felix Bloch Professor in theoretical physics at Stanford University — had this to say:

Smolin...believes that the constants of nature are determined by survival of the fittest: the fittest to reproduce that is. Those properties which lead to the largest rate of reproduction will dominate the population of universes and the overwhelming likelihood is that we live in such a universe. At least that's the argument.
But this logic can lead to ridiculous conclusions. In the case of eternal inflation it would lead to the prediction that our universe has the maximum possible cosmological constant, since the reproduction rate is nothing but the inflation rate.

When we asked Smolin about these objections, he said that many of these concerns were addressed in his book, The Life of the Cosmos, and that his upcoming book, Time Reborn: From the Crisis in Physics to the Future of the Universe, will also tackle many of these questions (the book also dispels the idea that time is a kind of illusion). And when possible, Smolin has addressed individual concerns (for example, the entire Smolin-Susskind debate can be readhere; and his retort to Vilenkin can be seen here).
Ultimately, however, the objections leave him unfazed.

"My impression is the idea has not been refuted even though several people have tried," he told me. "It doesn't mean the idea is true, but the idea has stood up to attempts to falsify it."
Pausing for a moment, and speaking more quickly now, he continued:
"Look, for me, the important part of the claim is that it is a scientific argument. The idea itself is not the most important thing — it's a very interesting idea, sure — but it instantiates a general claim that — if you want to explain the universe — one of the things you're going to have to explain is why we see certain laws of nature and not others. And the claim I'm making is that this question can in fact be answered scientifically — one that will lead toward a way for us to make predictions to see if the laws of nature are not fixed for all time, but evolved. That is the key point for me."
As for the exact mechanism of cosmological evolution, he says that a certain model or scenario might be right, or it might be wrong. The important point, says Smolin, is that science can only be completed to the extent of our ability to explain why the laws of nature are they way they are if they evolved over time.
"As far as the scenario of Cosmological Natural Selection is concerned," he says, "it's just an hypothesis just as much as it was for Darwin and Mendel — two scientists who figured out how natural selection worked before knowing anything about DNA or the molecular instantiation of genes."
This article originally appeared at io9.
Images: NASA/JPL-Caltech; Smolin pic: ideacityonline; galaxy/dna: physics.sfsu.edu.