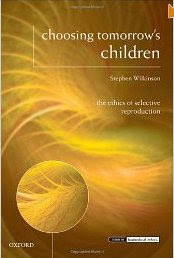 Just added this to my ever growing must-read list: Choosing Tomorrow's Children: The Ethics of Selective Reproduction by Stephen Wilkinson. Here's an excerpt from Iain Brassington's excellent review:

In Choosing Tomorrow's Children, Stephen Wilkinson looks at the ethics of selection, concentrating mainly on 'same number' decisions that we may make. A 'same number' decision is one in which we have chosen to bring a child to birth, but have not decided which. (A 'different number' decision, by contrast, would be one in which we have to choose whether to reproduce at all.) Put another way, he is concerned with choosing between different possible future people (p5). Within this range, though, there's a number of different situations that may give us cause to want to choose: we might be making decisions about choosing an embryo to act as a 'saviour sibling', choosing an embryo to avoid a certain disability, choosing in favour of a (prima facie) disability - as in the case of Candace McCullough and Sharon Duchesneau, who sought specifically to have a deaf child - or choosing one gender over another. Wilkinson spends time considering all these variations on the 'choosing children' theme, and is guided by a presumption of permissibility - a presumption that everything is permitted unless and until it is forbidden, and that the onus is on the person doing the forbidding to make the case for impermissibility.

As far as Wilkinson is concerned, many (if not most) of the arguments that one might mount to establish the impermissibility of choosing children fail. This principle applies even in relation to controversial decisions such as McCullough and Duchesneau's. For in their case, the strongest argument that they would have to face would in all likelihood have to do with the welfare of the child created thereby: that deafness is welfare-reducing, and that it is wrong deliberately to created a child with lower welfare than it might otherwise have enjoyed. Yet, says Wilkinson, even this claim is weak. Partly this has to do with a scepticism about whether choosing for a disability is necessarily the same as choosing for a lower quality of life; partly it has to do with a claim that, even if disabled, people overwhelmingly have a life worth living, and that since this is the only life they could possibly have lived, there is no sense in which they could be said to suffer from a wrongful life; partly it is because the impersonal 'Same Number Quality Claim' - the idea that we ought to select for a higher quality of life whenever possible - does not reliably tell us that all examples of selecting for disability are wrong, and so, even at its strongest, will not tell us that this particular instance of choosing disability is de facto wrong.