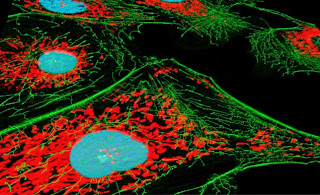 Researchers from the Scripps Research Institute and the Mayo Clinic have developed a new class of drugs that were shown to significantly slow the aging process in animal models. Remarkably, dramatic improvements were noticeable just days after treatment.
The research was only carried out on mice, but the introduction of an entirely new class of drugs, called "senolytics," could have incredible potential for humans as well.
Read the entire article at io9.
Posted by George at 3/12/2015