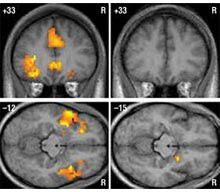 Readers of this blog know that I've started to develop a bit of a fascination with psychopathy. It all got started after attending the Moral Brain conference at NYU last April. The more I look into this subject, the more I understand why so many neuroscientists are making such a big fuss about it.

The one statistic that has stuck with me is the observation that 1-2% of the general population is psychopathic. As previously noted, psychopathic traits don't always lead to crime or violence. In fact, studies have shown that 3-5% of business-minded persons are psychopathic; the realization that ruthlessness and indifference can lead to an interest and/or proclivity in business shouldn't come as too much of a surprise. What I would like to know, however, is whether or not there is a correlation between psychopathy and business success. Any bets that there isn't?

On a similar note, I'd like to know what degree of psychopathy exists amongst politicians and those who seek influence. I'm sure that, historically speaking, psychopathic traits have worked well for those hell bent on attaining and maintaining power.

The 1-2% figure also got me thinking about genetics. This ratio is exceedingly high, an indication that this trait is more than just the result of random mutation. Humans, it would seem, are predisposed for psychopathy. It's a personality condition that may have some adaptive qualities to it. The question we need to ask now, therefore, is: are we evolving out of it, or into it?

A strong case can be made for both. But whatever the answer, we will increasingly be able to do something about it through the use of neurological interventions and genetic engineering.

Psychopathy is a personality disorder defined as severe emotional dysfunction, especially a lack of empathy. Psychopaths are completely unable to recognize such things as anger and fear in individuals, whether it be from facial expressions or verbal exclamations. It can also defined by the expression of anti-social behaviors. Psychopaths are generally regarded as callous, selfish, dishonest, arrogant, aggressive, impulsive, irresponsible, and hedonistic. Yet, psychopaths often exhibit higher than average intelligence and a superficial kind of charm.

Neuroscience is indicating that that psychopaths have a brain that is markedly different from neurotypicals. This difference can come about through genetic causes, or through injury.

In a recent study, neuroscientists showed that the psychopathic brain has significantly less grey matter in the anterior rostral prefrontal cortex and temporal poles than the brains of non-psychopathic offenders and non-offenders. These areas of the brain are important for reading other people’s emotions and intentions and are activated when people think about moral behaviour.

Neuroscientists have also implicated the amygdala in psychopathy. The amygdala is responsible for stimulus-reinforcement learning and responding to emotional expressions, particularly fearful expressions. It is also involved in the formation of both stimulus-punishment and stimulus-reward associations. Psychopaths show impairment in stimulus-reinforcement learning (whether punishment- or reward-based) and responding to fearful and sad expressions. Neuroscientists believe that this impairment drives much of the syndrome of psychopathy.

Are we becoming more psychopathic?

Scientists have determined that there is a genetic component to psychopathy. They argue that genetic factors may generally influence the development of psychopathy while environmental factors affect the specific traits that predominate. Geneticists have calculated that the heritability coefficient for psychopathy is around 50%.

Psychologist Robert Hare has argued that psychopathy does indeed have a genetic component. He has observed how many (male) psychopaths have a pattern of mating with, and quickly abandoning women, and as a result, have a high fertility rate. His contention is that these children may inherit a predisposition to psychopathy.

Evolutionary psychologists theorize that psychopathy represents a frequency-dependent, socially parasitic strategy. This may only work, however, as long as there are few other psychopaths in the community. More psychopaths means that there's an increased risk of encountering another psychopath as well as non-psychopaths likely adapting more countermeasures against cheaters.

That said, this "social parasite" theory doesn't take into account the ways in which psychopaths can be successful in modern society. It might be an increasingly adaptive trait. As already noted, there's a heightened tendency for psychopaths to enter into the business world. Similarly, there's the (potentially) increased likelihood for political success. Thus, a case can be made that psychopathy remains an adaptive trait in Homo sapiens, and that success in business and political domains increases reproductive success (i.e. wealth and status). Should this be the case, it's not unreasonable to suggest that the rates of psychopathy in the general population will remain stable — if not increase over time (given the same conditions).

A worthwhile study would be an analysis of the human genome to determine if the genetic factors required for psychopathy are more prevalent today than they were in the past. It's an open question as to how we could conduct such a study given the dearth of genetic material from our ancestors.

Are we becoming less psychopathic?

It's also quite possible that humans are evolving away from psychopathy. Perhaps the 1-2% is the smallest proportion yet in our species' history. It's generally thought, for example, that women are selecting for kinder, gentler males. This self-domestication has resulted in an increase in empathetic traits over time. It's quite possible that we're the "kindest" version ever to appear in our evolutionary trajectory.

On a similar note, we may have had a higher predominance of psychopathy in our past in consideration of our carnivorous legacy. We are a meat eating species, which implies predation. A carnivore would do well to not have too many feelings of empathy (particularly the ability to read fright, pain, and fear) for others, particularly prey. Humans don't tend to hunt anymore, a change in routine that works to un-enforce the presence of those psychological characteristics in our gene pool.

Despite these possibilities, there's little question that we may be able to weed-out psychopathy through biotechnological interventions. Genomics and the pending practice of human trait selection will alert prospective parents, not to mention their fertility doctors, to the possibility that their offspring could be psychopathic. Genetic technologies will let parents screen for what is essentially a genetic disorder.

On this note, a pair of interesting sidebars come to mind: (1) Given the high rate of heritability, it's very likely that one of the parents is a psychopath, and (2) Would parents be compelled to abort a child with a proclivity towards psychopathy?

Looking further ahead, and given further insights into how the brain works, it's very possible that psychopaths will be helped through pharmacological interventions, or even surgery, to fix the deficient areas in the brain (including the amygdala). This is speculative at this point, but it's not terribly unreasonable to consider such possibilites. Interventions like these would bode well for those who have developed psychopathic traits on account of brain trauma in which there is no genetic factor involved.

It's very possible that psychopathy as a personality disorder will eventually be eliminated. This will clearly bode well for individuals. But an unanswered question suddenly emerges: What are the broader social consequences, if any, to eliminating the psychopaths among us?
Posted by George at 5/10/2012

Thank you for a thought-provoking article. I'd like to raise a couple of objections.

It's very possible that psychopathy as a personality disorder will eventually be eliminated. This will clearly bode well for individuals

You say this as though it's uncontroversial, but it really isn't. I understand (and certainly don't disagree with, incidentally) the view that greater empathy is likely, in general, to be a positive thing for society at large (whether or not for any given individual). However, it doesn't follow that this is invariably or inevitably true - it's conceivable that too much empathy could be disabling, for example, and indeed that there are different routes (intellectual rather than emotional, say) to ethical behaviour.

A more serious objection (to my mind), however, concerns the question of classification. You seem to be implying that psychopathy - or, more broadly, perhaps any difference from 'neurotypical' development - is automatically and unambiguously a disorder, rather than just an unusual set of individual differences.

To make this assumption (let alone to raise the question of whether parents could be "compelled to abort" an unusual child!) is to place, I suggest, rather too much value on statistical normality. Consider autistic spectrum disorders: at the 'low functioning' end of the spectrum, these can be crushingly disabling - but a good many of the most brilliant and influential minds in history are suspected to have been the products of its other extreme. Just how much human variation do we want to 'weed out'?

As you mention, only a small minority of cases of psychopathy lead to criminal behaviour. Given the way psychopathy tends to be popularly described, it is perhaps worth stressing this: the vast majority of psychopaths are not criminals, and the vast majority of criminals (including many of the most violent or otherwise dangerous) are not psychopaths. Why, then, should we assume that society has a duty - or the right - to assume the worst and intervene?

@Nic: There is a big difference between autism and psychopathy. Autistics have a sense of compassion; psychopaths, by definition, don't.

I'm not able to find the source for it, but I had read an article saying that research had shown that it was precisely because of the fact that we were predators, that mirror neurons developed in humans. Mirror neurons were the source of empathy as far as I remember.