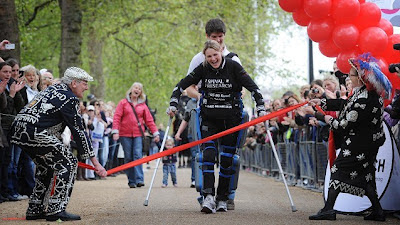 Okay, this is pretty cool: A paralysed woman has become the first person to complete a marathon in a bionic suit.

The former chiropractor was in tears as she became the first person to complete any marathon using a bionic ReWalk suit.

Hundreds lined the streets as she made her final steps to complete the race.

Mounted members of the Household Cavalry gave her a guard of honour as she crossed the finishing line on The Mall.

Jewellery designer Ms Lomas, who was left paralysed from the chest down following a horse-riding accident in 2007, said: "I'm over the moon.

Lomas was able to accomplish this task by using the ReWalk "wearable bionic suit."
Posted by George at 5/09/2012