The future of space telescopes 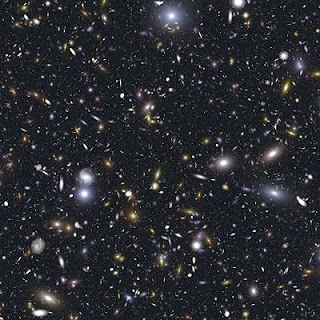 With the Hubble Telescope project slowly winding down, it's time to look ahead to the next generation of space-based telescopes. There are two projects currently in the works that will undoubtedly revolutionize space telescopy and yield extraordinary results once put into use: The James Webb Space Telescope and the Advanced Technology Large-Aperture Space Telescope.

The James Webb Space Telescope (JWST) will be an infrared space observatory with the main scientific goal of observing the most distant objects in the universe beyond the reach of either ground based instruments or the Hubble. The JWST is a NASA project with international collaboration from the European Space Agency and the Canadian Space Agency, including contributions from fifteen nations.

Current plans call for the telescope to be launched on an Ariane 5 rocket in June 2014 (or mid 2015) and put on a five-year mission. The JWST will orbit the Sun in Earth's partial shadow, approximately 1,500,000 km on the far side of Earth at the L2 Lagrange point. Objects at the L2 point orbit the Sun in synchrony with the Earth, which will allow JWST to use one radiation shield, positioned between the telescope and the Earth, to protect it from both the Sun's and the Earth's heat and light. It's also possible for the same shield to block moonlight as the telescope is much further from Earth than the Moon.

The JWST's primary scientific mission has four main components:
All of these tasks are more effectively done in the near-infrared than the visible. For this reason the JWST will not have the Hubble Telescope's visible light and ultraviolet capability but will be able to see much further into the infrared. Because of this, JWST will be able to see many more and much older stars than Hubble.

In addition, visible spectrum views cannot peer through much of the gas and dust that may obscure an image like infrared views can. Almost all of the gas and dust obscuring images in visible spectrum views may entirely disappear if viewed in the infrared, so that the stars lying behind the gas and dust will become easier to see. Infrared astronomy can penetrate dusty regions of space (such as molecular clouds), detect objects such as planets, and also view highly red-shifted objects from the early days of the universe.

The most distant stars in view are also the "youngest," that is, they were formed during a time period closer in time to that of the Big Bang than those stars less distant to us, such as our Sun. Because the universe is expanding, the light reaching us from those younger stars becomes red-shifted and are therefore easier to see if viewed in the infrared. Infrared light is also useful for observing the cores of active galaxies which are often cloaked in gas and dust.

The Advanced Technology Large-Aperture Space Telescope (ATLAST) is still in the design and approval stage. If constructed, it will be a 8 to 16.8-meter (320 to 660-inch) UV-optical-NIR space telescope with the ability to obtain spectroscopic and imaging observations of astronomical objects in the ultraviolet, optical, and Infrared wavelengths. It will have substantially better resolution than either HST or the JWST. And like JWST, ATLAST will be launched to the Sun-Earth L2 Lagrange point.

ATLAST is envisioned as a flagship mission of the 2025 to 2035 period and will be designed to address the question of whether or not life exists elsewhere in the Galaxy. It will work to accomplish this by detecting biosignatures like molecular oxygen, ozone, water, and methane in the spectra of terrestrial exoplanets.

In addition to this, ATLAST will assist in uncovering the underlying physics that drives star formation and the complex interactions between dark matter, galaxies, and the intergalactic medium. Because of the large leap in observing capabilities that ATLAST will provide, it is not fully known which types of investigations will dominate its use—just as the creators of HST did not foresee its pioneering roles in characterizing the atmospheres of Jupiter-mass exoplanets or measuring the acceleration of cosmic expansion using distant supernovae. ATLAST will likely have the versatility to outlast the scientific vision of current-day astronomers.

Technological advances have worked to drive science forward for centuries. There's no reason to believe that JWST and ATLAST won't do the same. Given the insights gleaned from Hubble, we may discover completely new things about the Universe, our Galaxy, and other solar systems.

We should also probably brace ourselves for what we may find. Our place in the Universe will undoubtedly get smaller and increasingly insignificant—that has been the trend for quite some time now as we continually gaze deeper into space.

In addition, I suspect that we'll start to find solar systems that more closely resemble our own. To date, we have only been able to find systems in which gas giants reside in the inner solar system. As it stands, our solar system, with its outer gas giants, is atypical—but that may be the result of an observation selection effect caused by limited telescopic technology.

Lastly, we should be on the lookout out for signatures that may reveal the presence of extraterrestrial intelligence. Specifically, we should look for signs of megascale engineering (Dysonian structures and megascale computers) and so-called calling-card objects.
Posted by George at 9/05/2010

Do you really think we could detect megastructures with these telescopes? The only way to tell if they were artificial that I can think of would be if we saw them being built (through a light-speed delay of course).

Absolutely! We should be able to detect the infrared signature of a Dyson Sphere, so the James Webb telescope would be perfect for his task.

I doubt that would convince the skeptics, they'd probably claim it's some natural phenomena like a dust cloud.