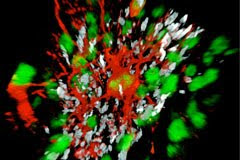 A recent study at UC Irvine has demonstrated that human neural stem cells can restore mobility in cases of chronic spinal cord injury, suggesting that a human-specific application may be around the corner. About 1.3 million people in the United States live with chronic spinal cord injury; this latest study indicates that human neural stem cells may be a viable treatment in the near future.

Previous studies have focused on the early stages of spinal cord injury when drug treatments are still effective in helping restore some functional recovery. But the UC Irvine study, led by Aileen Anderson and Brian Cummings of the Sue & Bill Gross Stem Cell Research Center, is important because the therapy has restored mobility during the later chronic phase—the period after spinal cord injury in which inflammation has stabilized and recovery has plateaued. As is stands, there are no drug treatments to help restore function in such cases.

The team transplanted human neural stem cells into mice 30 days after a spinal cord injury caused hind-limb paralysis. The cells then differentiated into neural tissue cells and migrated to spinal cord injury sites. After three months of this treatment, the mice demonstrated "significant and persistent recovery of walking ability" in two separate tests of motor function when compared to control groups.

"Human neural stem cells are a novel therapeutic approach that holds much promise for spinal cord injury," said Anderson, associate professor of physical medicine & rehabilitation and anatomy & neurobiology at UC Irvine. "This study builds on the extensive work we previously published in the acute phase of injury and offers additional hope to those who are paralyzed or have impaired motor function."

According to Dr. Stephen Huhn, vice-president and head of the central nervous system program at StemCells Inc., the strong preclinical data that has been accumulated to date will enable the transition to a clinical trial, which they plan to initiate in 2011.