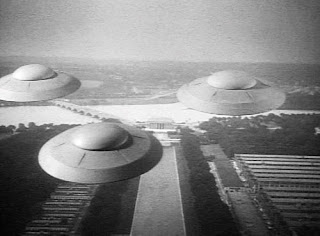 Looks like I created a bit of a fuss yesterday when I put Michio Kaku to task for suggesting that extraterrestrials may account for UFOs. I realize that he didn't explicitly say that ETIs were definitely behind unexplained flying phenomenon; he was obviously choosing his words very carefully. But it is my opinion that Kaku exercised poor judgement (and not courage as others have pointed out) by appearing on a ridiculous TV segment that was clearly geared toward linking UFOs with aliens. His claim that "we don't have the smoking gun...but this is as close as you can get to the smoking gun," was a bit alarming to me.

I recognize that there are still a number of unsolved mysteries out there. As Kaku pointed out, we cannot account for 5% of these sightings. Okay, cool, I get it.
But it's the leaping to conclusions I don't get. Why the immediate linkage to extraterrestrial intelligence? Why not ghosts, superheros, or the Flying Spaghetti Monster? The tendency to do so has become a reflex action, a legacy of 1950s era futurism and its fixation on flying saucers.

I'm guessing that a lot of people, including Kaku, didn't get the memo: spaceships are dead. The whole starship concept makes for great science fiction, but as a potential method for galactic travel and colonization, it's an idea that's increasingly growing into disfavor among the futurist cognoscenti. And that's if colonization even happens at all. Kaku should stick to physics and leave the theorizing to those who know what they're talking about.

As for me, correlating UFOs with aliens seems very... unintuitive. It's not immediately obvious to me that an extraterrestrial intelligence has anything to do with with appears to be atmospheric phenomenon. If we're going to start throwing baseless Wild Assed Guesses out there, I'd put collective psi phenomenon or a simulation glitch ahead of alien visitations.

But Wild Assed Guessing like this is a bit of a cop-out. It's a kind of desperatism that people resort to when science can't provide the immediate answers. And this is another thing that disturbed me about Kaku's recent television appearance. Sure, it's very likely that he was using the segment to pedal his unique take on physics—extra dimensions and all—but it was frustrating to see him give up so easily on established science. For Kaku to tread forth and make assumptions about UFO phenomenon falling outside of the known laws of physics was surprising.
Am I suggesting that we know everything there is to know about physics? Not by a long shot. I'm just suggesting that we exhaust all scientific avenues of inquiry before we start making extraordinary and sensationalistic claims like these.
Posted by George at 9/05/2010

Oh, and how do you know UFO's aren't manufactured by a von Neumann probe hidden at the edge of the solar system? That seems more likely than a collective psi phenomenon at least.

You're invoking the Zoo Hypothesis as a potential solution to the Fermi Paradox. This violates non-exclusivity; it's a solution that can account for some but not all ETI behavior.

Probes may be viable from a technological standpoint, but it doesn't appear that they're in use.

I know there are more plausible explanations for UFOs. I was just pointing out that the explanations you gave as examples were actually more ridiculous than ETs.

George, I think you're being unfair here. You say Kaku is making assumptions "about UFO phenomenon falling outside of the known laws of physics". He isn't making assumptions, he's referring to particular cases in the book that has been invited to discuss.

For instance, in the book Iranian pilot General Parviz Jafari tells how a 'craft' he was chasing changes position impossibly:

We kept it locked on with radar. The size on the radar scope was comparable to that of a 707 tanker...We got closer, to 25 miles at our twelve o'clock position. All of a sudden it jumped back to 27 miles in an instant. I wondered what it was. I was still seeing that giant, brilliant diamond shape with pulsating, colored lights."

I don't particularly buy the ET explanation for UFOs either, but you are arguing against Kaku for giving his thoughts on evidence that you yourself haven't read. That's rather unscientific in itself wouldn't you say? Such knee-jerk reactions against discussion of UFOs and the like is unfortunately fairly common though, and offers fertile ground for analysis as well.

Why not pull up UFO 'skeptics' who make up ridiculous explanations just to rationalise strange events, rather than investigating scientifically and perhaps making new discoveries (and thus advancing science)? Why not new blog posts on James Randi's unscientific dismisal of psi and the like, when he obviously hasn't read the research and even resorts to lying to make his point?

In short, why pull Kaku out for some casual banter and speculation about evidence given in a book he has read? What inspires the antipathy for his UFO opinion, when I could point you at far more egregious examples of unprofessional and unscientific behaviour by 'skeptics' on a day to day basis?

George, I agree most heartily with you on your assessment of Kaku's statements.

Kaku said that this is the closest to a 'smoking gun' for a proof of extraterrestrials we can get, apart from alien DNA or an alien artifact. This seemed quite explicit to me in his video and the ones denying it should give the video another viewing.

As to whether UFOs are actually a plausible explanation, well I'm sure we all agree it is possible. However as the axiom goes 'extraordinary claims require extraordinary evidence'. Claiming genuinely alien UFOs are the cause of such things is far from the simplest solution and thus the burden of proof lies on the claimant.

So yes, I'm sure no one denies that there are some unexplained things we've witnessed. However, it probably isn't aliens wizzing by, but rather simply some phenomena we don't understand or are mistaken about.

While I'm "All" for a potential simulation alteration as the {source} of ufos. I want to propose a twist, it's not a glitch but an actual program serving some unknown function.

"I recognize that there are still a number of unsolved mysteries out there. As Kaku pointed out, we cannot account for 5% of these sightings. Okay, cool, I get it. But it's the leaping to conclusions I don't get. Why the immediate linkage to extraterrestrial intelligence? Why not ghosts, superheros, or the Flying Spaghetti Monster? The tendency to do so has become a reflex action, a legacy of 1950s era futurism and its fixation on flying saucers."

Comparing ET intelligence & probes & their technology and ghosts or elves is a false analogy to start with.

Whith this kind of reasoning, one could create SIPU as The Search for the Invisible Pink Unicorn without looking stupid.

What we know is that the Universe is old enough and our civilisation young enough in comparison to have ET visiting us (@ speeds < c) with their probes since a very long time. Then one could ask : "how come we do not have any proof /evidence of that ?"

The answer is simple, just look at the NEO "Near Earth Objects" that fly by our planet and that are detected once they are in our "vincinity". It just shows that even with natural objects, we do not have a good surveillance system yet. Not only that, but how could someone tell if it is natural or artifical ? 1991 VG* is a good example of our limits. Now, Ufology, does not have the tools & methods to help much (or at all) to answer the double question, that is : Are we alone in the Universe and are we visited by probes or other devices ?

The only initiative that I know of that could answer this great question is S3ETI* by Scot Stride (JPL/NASA) or maybe another SETV** initiative (proposal) initiated by Massimo Teodorani (It).

Some ufos could be ET probes and the only way to know for sure is by looking/searching for their hypothetical manifestations.