The search for artificial objects in the cosmos 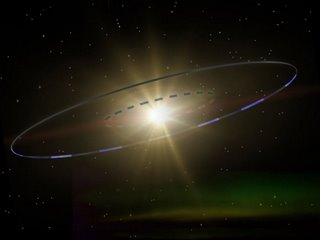 Considering how difficult it is to detect radio signals from ETI's, it has often been suggested that we also look for signs in the cosmos that may indicate the presence of intelligent life. Given vast distances, however, that task is certainly more easily said than done.

An interesting paper that may help in this regard was recently published by French astronomer Luc Arnold in which he suggests that scientists should be searching for light signatures that would indicate not just the presence of artificial objects such as Niven Rings and Dyson Spheres (i.e. megastructures), but of calling-card objects as well.

His paper, "Transit Lightcurve Signatures of Artificial Objects," offers guidelines for astronomers indicating the kinds of signatures they should looking for that could indicate the presence of a megastructure of some sort. The abstract reads like this:

The forthcoming space missions, able to detect Earth-like planets by the transit method, will a fortiori also be able to detect the transit of artificial planet-size objects. Multiple artificial objects would produce lightcurves easily distinguishable from natural transits. If only one artificial object transits, detecting its artificial nature becomes more difficult. We discuss the case of three different objects (triangle, 2-screen, louver-like 6-screen) and show that they have a transit lightcurve distinguishable from the transit of natural planets, either spherical or oblate, although an ambiguity with the transit of a ringed planet exists in some cases. We show that transits, especially in the case of multiple artificial objects, could be used for the emission of attention-getting signals, with a sky coverage comparable to the laser pulse method. The large number of expected planets (several hundreds) to be discovered by the transit method by next space missions will allow to test these ideas.

Should such an object be detected, however, the challenge will be to determine whether or not the object is indeed synthetic and not natural. For example, when pulsars were first discovered the unnaturally regular nature of its emissions baffled scientists, leading to the tongue-in-cheek name, LGM-1 which stands for "little green men." Of course, it's been shown that pulsars are indeed natural phenomenon.

What's interesting about Arnold's paper is his suggestion that the transit method will enable scientists to pick up on the presence of unnatural objects. As he notes, "A remarkable lightcurve would be created by free-flyers transiting their star successively in a distinguishable manner. At each period, we would observe a series of transits whose number and timing would claim its artificial nature and will of communication."

What he's suggesting is that ETI's may devise megastructures as a means to indicate their presence to other intelligences. Arnold analyzes three different shapes that could be detected, including a perfectly triangular structure and a 2-screen object (think of a rectangle with a box-like hole cut in the middle). It's these "attention getting" lighcurves that Arnold is interested in.

The suggestion that ETI's might be using gigantic calling cards that orbit around suns to say "hi" is a fascinating idea -- and arguably more plausible than the notion that we should be listening for radio signals.
Posted by George at 9/25/2006

I think such structures would be visible one way or another.

Incidentally in 2009-2011 we will have a chance to observe the peculiar companion of the bright star Almaaz;
http://www.astro.uiuc.edu/~kaler/sow/almaaz.html
this object most probably won't be artificial, but you never know.

I think such structures would be visible one way or another.

Incidentally in 2009-2011 we will have a chance to observe the peculiar companion of the bright star Almaaz;
http://www.astro.uiuc.edu/~kaler/sow/almaaz.html
this object most probably won't be artificial, but you never know.