Science & Spirit: Will men and women ever agree? 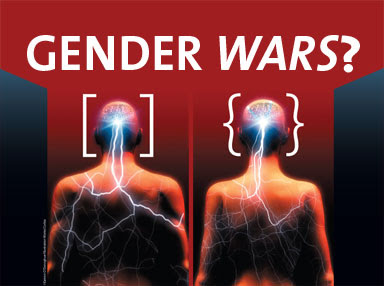 The latest edition of Science & Spirit takes a look at modern gender politics and potential future sociological and medical issues.

The Gender Debate: Timing is Everything
by Beryl Lieff Benderly
The way that science talks about male and female has dramatically changed over the past twenty years, leaning toward equality today, as told in the adventures of our correspondent, then and now.

Biology May Be Our Destiny
by Steven E. Rhoads
For all the power academic “gender studies” have today, evolution and biology may have the final word in why men and women are different and why society should take this to heart.

The End of 'Man'
by Pat Craig
Although some scientists say the Y chromosome that produces boys may evolve out of existence, others don’t see the curtain dropping yet, if at all. The Y may have the remarkable power of self-repair—and ‘man’ will survive.

'Is It a Boy or a Girl?'
by Milton Diamond
The intersex child, born with sexual ambiguity, is a heart-wrenching issue glossed over by society until now. A new medical view urges letting the child, guided by science, decide future sexual identity.

Q&A: On Doing the Math
David C. Geary
For all the debate on how boys and girls compare in math and science, these differences are small compared to the gap between Americans and other countries. One expert on the brain, evolution, and math offers his views.

Male and Female Mystics
by Carol Lee Flinders
Religious mystics have always been creative in their male and female images of God and their own gender roles in society. They show that although roles and traditions exist, they are transcended as well.
Posted by George at 10/06/2007