Thinking inside the box: Visualizing data with mind maps

A friend of mine recently turned me on to a new way of organizing and conceptualizing data. Called mind mapping, it is a method of note taking that utilizes diagrams which are used to represent words, ideas, tasks or other items linked to and arranged radially around a central key word or idea. Mind maps can be used to generate, visualize, structure and classify ideas. They're also used as an aid in study, organization, problem solving, decision making and writing.

After playing around with mind mapping software for several weeks now (I'm using the open source FreeMind), I have to admit that it totally works for me. I've started to use it for virtually all aspects of my life, whether it be organizing my next blog post or structuring my daily routines. I'm even using it for networking purposes by keeping track of my friends and linking them to various parts of my life (e.g. wine tasting, concert going, mountain biking, transhumanism, etc.)

How and why does it work?

It works because mind mapping is more sympathetic to the way in which the human brain operates. Our minds do not organize data in the same way we typically structure notes or arrange to do lists. Rather, we like to conceptualize things in a more graphical or symbolic manner, which results in better and more intuitive conceptualization. Further mind maps double as a mnemonic device as elements are remembered more easily when they are laid out in a graphical, non-hierarchical fashion (some studies have shown as much as 10% improvement in recall, but I'm inclined to think it's better than that). 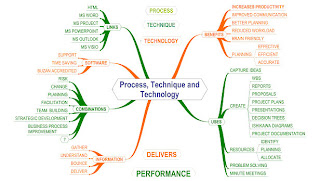 Typically, mind maps are composed of an image-centered diagram that represents semantic or other connections between chunks of information. Elements are arranged intuitively based on the importance of the concepts and are organized into groupings, branches or areas.

This method better facilitates brainstorming approaches. Idea flow can be better captured when elements are laid out in a radial, non-linear graphical manner. Subsequently, this strategy eliminates the hurdle of initially establishing an intrinsically appropriate or relevant conceptual framework to work within.

Mind mapping has allowed me to take a more holistic approach to my research, analysis and writing. I have created a massive mind map that I'm using to key in ideas as they come to me. The map never becomes unwieldy because extraneous branches can always be collapsed. Elements can be linked across the map, either with graphical symbols or internal hyperlinks. When the entire map is open it looks like a giant bowl of Alphagetti.

My hope is that over time the mind map will become exactly that: a map of my mind. Having a large and highly organized database with interlinks should allow me to better "see" and remember the data that is in my head and help me bring together related concepts.

The key, of course, is to not let the technology get in the way of work. One runs the risk of obsessing over the quality of the mind map. Just because I'm reshuffling data within my map doesn't mean I'm actually getting anything done. A tool is not an end unto itself; it is an assistive device that must ultimately lead to a final product or goal.

Time will tell if this will be the case for me, but my initial impression is very positive.
Posted by George at 9/09/2007

Eventually you may find that even, with folded nodes, mindmaps get too large. I've been using diagrams of this type for about 30 years, and on big projects I found they always did. Collapsing nodes helps, but, like linked maps, only up to the point where you miss an important association because it wasn't visible. ("Out-sight-out-of-mindmap" you might call it.)

I developed a solution to cope with that: 3D Topicscape, which you might want to look at. Using a 3D landscape and zooming and flying, you can take in and work with much more at a time while still using the basic mapping approach.

Regards
Roy
http://www.topicscape.com
For a new dimension in mindmapping

As you say, the key thing is to avoid get too organizing when doing it. Mindmaps should be chaotic and spontaneous rather than logically coherent - and then afterwards you should analyze and categorize results.

This is why most IT mindmap tools fall short, in my opinion. They require you to think too much about the nomenclature of your mappings.
Can't speak of Topicscape, though =)