Scott Draves and the evolution of art

I admire artists who use technology in unique ways, which is why I'm a big fan of Scott Draves. He is the inventor of Fractal Flames and the leader of the distributed computing project Electric Sheep. He is also a video artist and an accomplished VJ who goes by the name, "Spot."

Fractal flames is a form of art that utilizes iterated function systems (IFSs) for constructing fractals, but it differs from traditional IFS in several ways. For example it selects color by structure instead of monochrome or by density. The results are quite original and differ significantly from conventional fractal art. 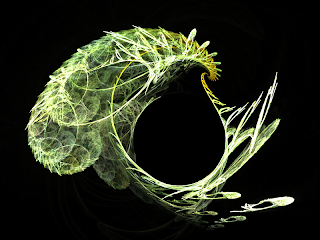 As an aside, if you use GIMP, an open source program along the lines of Photoshop, you can create your own fractal flames.

The Electric Sheep project is a free, open source screen-saver that is run by thousands of people over the Internet. When the screen-saver turns on it communicates with other computers running the same program. The result is a shared collaboration in which animations known as "sheep" twist and morph on the screen. As Draves says, "The result is a collective "android dream", an homage to Philip K. Dick's novel Do Androids Dream of Electric Sheep." 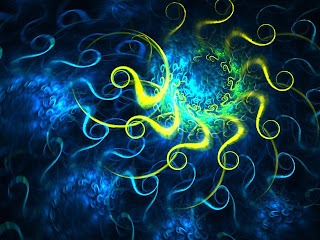 Recently, Draves installed his innovative "Dreams in High Fidelity"display into Google's main lobby, near the model of SpaceShipOne. He describes it as a painting that evolves. It was designed and rendered with the Electric Sheep screen-saver (at triple resolution), and is driven by a "cyborg mind" composed of 40,000 computers and people mediated by a genetic algorithm. Physically it consists of a small computer driving a large hi-def display while creating a continuously morphing, non-repeating, abstract animation.

For those of you living in the NYC area, this coming Saturday January 20, Draves will be having a public conversation along with Alex Grey at his Chelsea gallery, the Chapel of Sacred Mirrors. In addition there will be live painting by Alex and dance music. The HifiDreams will be projected, and Draves will be doing some up-tempo and Spotworks-style, live-mixed VJ sets. More information about this event can be found on Drave's blog.
Posted by George at 1/18/2007

very useful informations thanks for sharing.They are too neccessary for me. I bookmarked.
saç ekimi
laptop tamiri