RNA interference and the war on viruses

A technique known as RNA interference may have a profound impact on how viruses are eventually dealt with, including our ability to contend with pandemic situations.

RNA interference (RNAi) is a mechanism in molecular biology where the presence of certain fragments of double-stranded RNA (dsRNA) interferes with the expression of a particular gene which shares a homologous sequence with the dsRNA. 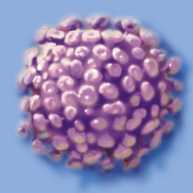 According to the latest Wikipedia entry, RNAi appears to be a highly potent and specific process which is actively carried out by special mechanisms in the cell, known as the RNA interference machinery. It appears that the machinery, once it finds a double-stranded RNA molecule, cuts it up, separates the two strands, and then proceeds to destroy other single-stranded RNA molecules that are complementary to one of those segments. dsRNAs direct the creation of small interfering RNAs (siRNAs) which target RNA-degrading enzymes (RNAses) to destroy transcripts complementary to the siRNAs.

The genetic information of many viruses is held in the form of double-stranded RNA, so it is likely that the RNA interference machinery evolved as a defense against these viruses. The machinery is however also used by the cell itself to regulate gene activity: certain parts of the genome are transcribed into microRNA, short RNA molecules that fold back on themselves in a hairpin shape to create a double strand.

When the RNA interference machinery detects these double strands, it will also destroy all mRNAs that match the microRNA, thus preventing their translation and lowering the activity of many other genes.

What does this all mean? Essentially that we'll be able to attack viruses more directly, including such pathogens as SARS.

A recent issue of Nature Medicine, for example, reported on a new approach to battling SARS that uses small interfering (si)RNAs, with which they successfully treated SARS-CoV-infected Rhesus macaques.

In the last 10 years, RNAi has migrated from the theoretical to the practical, and hopefully it will prove effective when we will really need it.