Kurzweil's and Joy's 'Recipe for Destruction' 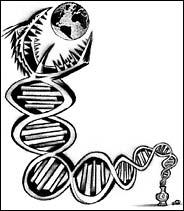 I missed this back when it was published in the NYT in October 2005: Recipe for Destruction by Ray Kurzweil and Bill Joy.

In this opinion piece, Kurzweil and Joy condemn the United States Department of Health and Human Services for publishing the full genome of the 1918 influenza virus on the Internet in the GenBank database. "This is extremely foolish," they write, "The genome is essentially the design of a weapon of mass destruction. No responsible scientist would advocate publishing precise designs for an atomic bomb, and in two ways revealing the sequence for the flu virus is even more dangerous."

First, Kurzweil and Joy believe it's much easier to recreate the virus than to build an atomic bomb, and secondly, they argue that the release of the virus would be far worse than an atomic bomb. "Analyses have shown that the detonation of an atomic bomb in an American city could kill as many as one million people," they write, "Release of a highly communicable and deadly biological virus could kill tens of millions, with some estimates in the hundreds of millions."

To deal with the situation they call for the development of international agreements by scientific organizations to help limit such publications and an international dialogue on the best approach to preventing recipes for weapons of mass destruction from falling into the wrong hands. Kurzweil and Joy also argue for a "new Manhattan Project" to develop specific defenses against any biological viral threats (like harnessing RNA interference, for example).