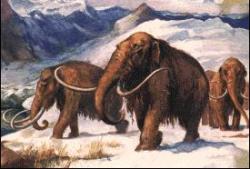 Nature is reporting that researchers have devised a new technique that has helped to rebuild part of woolly mammoth's genome. The process, called multiplex polymerase chain reaction, required DNA to be teased out from just 200 milligrams (0.007 of an ounce) of bone found at a mammoths' graveyard in the Siberian permafrost. Their technique copied 46 chunks of sequence which were rearranged to give a picture of the creature's mitochondrial DNA.