Batchelor: Alone With Others 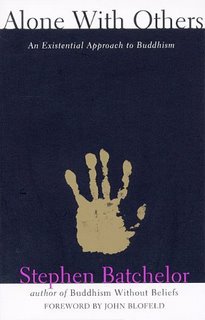 Alone With Others, An Existential Approach to Buddhism
By: Stephen Batchelor

This is essentially the precursor to Batchelor's book, Buddhism Without Beliefs.

Blurbage: "Alone With Others is a uniquely contemporary guide to understanding the timeless message of Buddhism, and in particular its relevance in actual human relations. It was inspired by Shantideva's Guide to the Bodhisattva's Way of Life , the oral instructions of living Buddhist masters, Martin Heidegger's classic Being and Time , and the writings of the Christian theologians Paul Tillich and John MacQarrie."

Batchelor's quest is for an existential Buddha, essentially rethinking the heart of the historical Gotama's quest with the latter's confrontation of existential questions in reflecting on old age, sickness, and death. This foundation is laid out in Alone With Others, where Batchelor relies almost entirely on Martin Heidegger's categories of being-alone and being-with-others. This, it will be seen, has its own problems.

Batchelor's deconstruction of Buddhism is not a demythologization like Rudolf Bultmann's approach to Christianity. Nor is it a scholar's critical reconstruction in the style of John Dominic Crossan and others working on the "historical" Jesus. Perhaps its affinities are closer to the lyric conceptualization of Ernst Renan's Jesus or Hermann Hesse's Siddhartha, where a philosophical sentiment reigns in a sympathetic attempt to capture the life and thinking of a sage. Except that Batchelor intends to extract a great deal more than these portraits, but a great deal less than what pious Eastern accounts have added.

Batchelor is concerned that the interpretations and embellishments to the life and teachings of Gotama over the centuries obscure the core of Gotama's existential questions, the very style in which he posed them and intended to work them out. Batchelor believes that Westerners will be misled in solving their own existential questions if their introduction to the historical Gotama (it's hard not to make the parallel to the "historical" Jesus) is seen through the eyes of religion, not philosophy.

Gotama solves the being-alone question with the ideas of contingency, impermanence, and rejection of the atman or self. The result should be "authentic being-alone." as Batchelor puts it. Gotama solves the being-with-others dilemma by resolving to compassionately share his insight with others rather than keeping it to himself. The result should be "authentic being-with-others." That sharing is the model of the bodhisattva, and reflects the transition from arhat in Theravadan tradition to bodhisatva in the Mahayan traditions.

Here is the first problem. Batchelor sees inauthentic being-with-others as "desirous attachment, aversion, and indifference," which he contrasts to equanimity.

This insight becomes the basis for interaction which is society. Society does contain a degree of civility without attachment, as in the concept of justice, although Batchelor hardly elaborates. He sees these virtues strictly in terms of relationships, and sketches out values for what he calls a "culture of awakening," which is an idea of great potential. But he remains restricted, ironically, to a vision of fulfilling these virtues only in the context of his revised and modernized Buddhism, as dharma and sangha.