PETA to sue SeaWorld under US slavery law 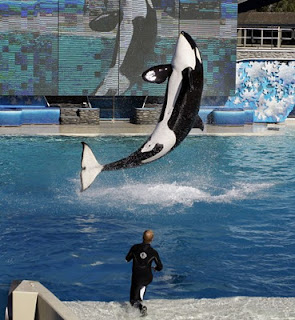 I tend to have a love/hate relationship with PETA. The hate part, I'd say, stems from their often outlandish, sensationalistic and highly inappropriate campaigns.Their tactics often hint at a rather underdeveloped and unsophisticated approach to animal welfare. Can it truly be said that PETA has made a difference to animals?

Regardless, every once in a while PETA does something that makes me realize that I can't stay mad at them for long, and this is one of those times: PETA is accusing SeaWorld of enslaving orca whales—and they're using the 13th Amendment of the US Constitution to enforce their claim. According to the PETA website:

In the first case of its kind, PETA, three marine-mammal experts, and two former orca trainers are filing a lawsuit asking a federal court to declare that five wild-caught orcas forced to perform at SeaWorld are being held as slaves in violation of the 13th Amendment to the U.S. Constitution. The filing—the first ever seeking to apply the 13th Amendment to nonhuman animals—names the five orcas as plaintiffs and also seeks their release to their natural habitats or seaside sanctuaries.

The suit is based on the plain text of the 13th Amendment, which prohibits the condition of slavery without reference to "person" or any particular class of victim. "Slavery is slavery, and it does not depend on the species of the slave any more than it depends on gender, race, or religion," says general counsel to PETA, Jeffrey Kerr.

"All five of these orcas were violently seized from the ocean and taken from their families as babies. They are denied freedom and everything else that is natural and important to them while kept in small concrete tanks and reduced to performing stupid tricks," says PETA President Ingrid E. Newkirk. "The 13th Amendment prohibits slavery, and these orcas are, by definition, slaves."

This is all sorts of awesome, particularly the language being used—namely the language of nonhuman personhood. I am absolutely on board with this suit. The orca whale, along with other cetaceans, are most certainly persons (see What is a person?). Furthermore, I'd say the same consideration should be given to other nonhuman persons, including elephants and all the great apes (which would have implications for zoos and circuses).

I'm also excited to see that the US Constitution is being interpreted and applied in this way. Because the 13th Amendment makes no mention of human persons per se, it can be assumed that all persons, regardless of species, should be included. Personally, I don't think this is a trick of language or omission; I believe it's within the spirit of the law.

And at the heart of the matter, of course, is the issue of animal exploitation—the suggestion that highly sapient and emotional creatures are being used as slaves. As I've written before (see Putting an end to dolphin exploitation at aquatic theme parks), these nonhuman animals are capable of exhibiting their discontent and dissatisfaction with their conditions—whether it be through their body language, disobedience, or the expression of sheer emotional defeat. That an animal rights group is working to protect their interests with an existing body of law is exciting. It's exactly what we're trying to do at the Rights of Non-Human Persons Program, which is to give these nonhuman persons the same legal protections that humans have.

Now all this said, PETA and company have their work cut out for them. Just because I agree with their interpretation of the Constitution doesn't mean that the courts will. In fact, the courts will likely err on the side of prejudice and ignorance, and proclaim that PETA's claim is not within the "spirit" of the Constitution, or some other unimaginative drivel like that.

Indeed, a quick scan of the media's coverage of PETA's lawsuit is discouraging. Most outlets are using disparaging language to describe PETA's efforts and are lumping it in with their other "outrageous stunts" (see TIME's coverage).

It's also obvious that the lucrative aquatic theme park industry will not go down without a fight. As highlighted in the documentary, The Cove, this is big business with global reach.

And regrettably, there is already a segment of the population that is taking great offence to this issue. Take the response of David Steinberg, a professor at the Thomas Jefferson School of Law in San Diego, who called the suit "patently, absolutely frivolous":

The 13th Amendment abolished the abhorrent, despicable practice of the slavery of human beings. PETA is demeaning the integrity and humanity of people who were owned as slaves. That is outrageous.

Steinberg's contention, that we shouldn't recognize nonhuman persons as slaves because it would demean those whose ancestors were once held as slaves, is deeply problematic. It is this exact sentiment that must be addressed, combated, and ultimately destroyed if the supporters of this issue wish to succeed. Nothing is preventing the furthering of animal rights more than this idea—and it's the same idea that has prevented the broadening of rights throughout human history. It's the seemingly endless reprise of the situation in which the "in" group, for whatever reason, is reluctant to expand the circle of rights and include the "out" group because it would somehow lessen or threaten what it means to be in the "in" group. What it is is patent nonsense.

First, it's the seductive and easy response—the one that appeals to most people's conservative nature and their reluctance to think too deeply about instigating change. Most people don't like to upset the apple cart.

Second, it represents the exact opposite of what would actually happen. Protecting and broadening the rights of minority groups can only increase the dignity and integrity of both those who grant them and those who would benefit from them. It's what makes an enlightened and progressive society exactly that—it's what endows our species with the integrity and humanity that Steinberg claims is under threat.

Third, the claim that some people might feel lessened or demeaned by the suggestion that some nonhuman persons are slaves still doesn't make it right or invalid. People get offended all the time. We can't let that stop the correct course of action. Taking offence to something, or feeling "demeaned" by a piece of legislation, is not the fault of the legislation. Rather, it's the fault of the person allowing themselves to feel that way. It's a kind of "yuck factor ethics", which is not really ethics at all. Furthermore, granting rights to nonhuman persons would in no real or tangible way lessen what it means to be human. We'll retain our humanity and our rights regardless of whether or not we grant them outside the species.

My suspicion is that the fear driving this sentiment is that we'd lose our exalted human place on top of the food chain. Well, to that I say: Too bad. Rights and protections need to be granted to those who both deserve and need them.

/sign as in *seriously*. This is important. Let's extend the concept of personhood along logical lines and show the universe what humanity means.