Putting an end to dolphin exploitation at aquatic theme parks 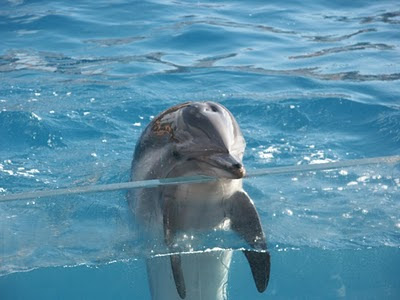 A number of years ago I visited Sea World in Orlando, Florida. The experience proved to be a formative one, as it would mark the last time I would ever visit an aquatic theme park. What I saw there at the dolphin show that day shattered all illusions I had about the treatment of dolphins at these parks, while at the same time demonstrating to me the obvious ways in which they can express their individuality and intentions—and how this is conveniently ignored by us in ways that are completely self-serving.

The show got off to a rocky start. As the cheesy performance music blared through the loudspeakers, the trainers enthusiastically marched to the stage and assumed their positions. They blew their high-pitched whistles and waited for the dolphins to do their part.

But the dolphins ignored the cue. They swam nervously in their holding tank, circling and circling.

The trainers tried again, but the dolphins remained steadfast. They weren't going anywhere.

So, the trainers stopped the show and addressed the audience. We were told that, as a hierarchical species, the leaders of the troop were preventing the rest of the dolphins from partaking in the show. The reason, they suspected, was on account of a looming storm.

Indeed, hurricane Ernesto was slated to hit the region in the next 24 hours, and it's likely that the dolphins, sensing the low pressure system, were in a state of agitation. The last thing they wanted to do at that moment was to follow commands and perform tricks.

Unfazed, the trainers said they weren't about to let the dolphins have their way and that they were going to try and try again until they performed the show as expected.

Once again, the trainers marched to their stations and the cheesy music began anew. After another short delay, the dolphins finally decided to take part. But I have to say, it was the most half-assed effort I've ever seen put on by dolphins. They consistently missed their cues and went about their jumps and tricks as if they were just going through the motions.

What was happening was blatantly obvious to anyone paying attention: Their hearts were simply not into it.

As I sat there watching this spectacle, I started to feel ill, and I suddenly regretted coming to the park. I was hit hit with a glaringly obvious realization.

These dolphins are slaves.

Indeed, we are making these highly intelligent and emotional animals perform tricks against their will. They are confined to ridiculously small tanks and expected to perform on cue—and should they refuse, they're beaten back to submission by an unrelenting crew of trainers who simply won't take no for an answer—even if it's in front of a live audience.

Now, I realize that the dolphin show brings a lot of money to these parks—but the dolphin tank has got to go. It's cruelty through and through. As nonhuman persons, dolphins need to be protected from these kinds of abuses. They are not ours to play with.

We have no right to compel dolphins to entertain us. They deserve better than that. Moreover, we have no right to contain them in this way. Dolphins need to swim. In fact, in the wild, dolphins swim an average of 65 to 85 kilometers per day. The tanks at these theme parks must feel intensely claustrophobic to them. It's torturous.

And as I learned on that day at Sea World, dolphins are also capable of expressing their discontent. They can show us when they're not happy and they can express their will. We need to start paying attention and put aside our petty desire to watch dolphins jump through hoops.

It's time to stop this kind of animal exploitation.

Check out the IEET's Rights of Non-Human Persons program to learn more.
Posted by George at 2/19/2011

Totally agree, we need to teach kids that those theme-parks and circus where they make animals do tricks and hold them in cages is slavery.

I knew that since i was a kid. I always thought it would be best to have HUGE tanks where we would walk in transparent tunnels underwater and see those wonderful animals living an undisturbed life.

Great post. Opened my eyes to the experience you had there back in '06. BTW I found a typo: there is a double word (then I was hit hit by something)

I remember reading John Lily's "Man and Dolphin" in college, he wanted to design a half-underwater lab where dolphins could swim in from a cove and leave when they wanted.

we've just been to seaworld and had the same realisation that these dolphins were not happy and they did not want to be there swimming in a shallow pool.Whilst everyone clapped i couldn't believe how pointless the show was with the trainers dressed as parrots it was almost laughable.On the other hand my g/f was deeply upset at the treatment of the dolphins and we've now decided we'll never go to another theme park again.

i find it great that marine biologist from around the country have this forum to dicuss and comment about zoological and husbandry practices at facilities such as seaworld. i do have a question for mr. dvorsky. i dont see anywhere in your bio that you have any expetise in zoological operations......mmmm......thats wierd, but anyways i digress. keep up the great here here mr. dvorsky. while you wsting everyones time posting garbage seaworld has been resuing more than 20,000 mammals, birds, reptiles and fish back to the wild. SeaWorld is and always will be an institution dedicated to the highest standard of safety, animal care and training, zoological display, and educational interpretation.