What is a person? 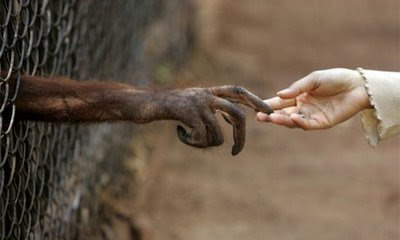 A number of Sentient Developments readers have asked what I mean when I refer to non-human persons and the personhood spectrum. It's a fair question, and to be honest, I have yet to see a satisfying personhood taxonomy with an attendant list of traits that fully circumscribe the personhood continuum. I consider this an incredibly important issue as we move into a 'transhuman condition' and as we work to give non-human animals greater moral consideration. If I ever go back to school I think this will be a likely topic for a thesis.

A big question I would like to answer is, should personhood status be described as a spectrum or as a definitive, fixed state. In other words, are dolphins and bonobos as much persons as a genetically modified and cyborgized transhuman? And is such a distinction even necessary? Should persons, regardless of where they are situated in the personhood spectrum, all have the same moral and legal considerations? More philosophically, given the space of all possible minds, how can we begin to identify the space of all possible persons within that gigantic spectrum?

As for defining and circumscribing personhood, a number of thinkers have tried to give it a shot. First out the gates was Joseph Fletcher, an Episcopalian theologian and bioethicist, who argued for a list of fifteen “positive propositions” of personhood. These attributes are:
Many of Fletcher's traits are fairly subjective, open to argument (e.g. how do you measure intelligence, and how intelligent is intelligent enough?) and difficult to test scientifically (at least by today's standards). But what's interesting about this list is that not all human beings qualify as persons, and not all persons qualify as human. Moreover, individuals, at one time or another, are not persons. Fletcher argued that some severely developmentally challenged humans were not persons, and that chimeras and cyborgs might someday qualify as persons (what he called "parahumans").

Further, as Linda MacDonald Glenn noted in her paper, "When Pigs Fly? Legal and Ethical Issues in Transgenics and the Creation of Chimeras," Fletcher's list is more of a continuum (which is not necessarily a problem -- an idea I'm rather partial to) than a description of a definitive and fixed state -- the advantage being that it would serve as a better model for application to legal theory and practice.

Looking to the future, and as we move forward with NBIC technologies, we run the risk of denying essential basic liberties to intelligent and sentient beings should we fail to better elucidate what it means to be a person (whether they be non-human animals or artificially intelligent agents). As Glenn notes, we need to be prepared to ask, "How can we preserve our human rights and dignity despite the fact that our 'humanness' may no longer be the exclusive possession of Homo sapiens?"

Thankfully there appears to be a trend in favor of widening the circle of moral consideration to some non-human animals. We obviously have laws against animal abuse, some animal experimentation, and unacceptably constrained levels of confinement. More significantly, however, a number of countries are looking to see highly sapient and emotional non-human animals like the great apes be given proper personhood status along with all the attendant legal protections.

Ultimately, what a lot of people need to realize is that their status as persons will not be diminished should "lesser" animals be granted personhood status. This is a common concern -- that it would be undignified for humans to have to recognize the presence of other persons who are not human.

There are two things I'll say to that: First, it's our humaneness and sense of social justice that's important -- not that we're "human," and second, as we work to develop greater-than-human artificial intelligence, we are poised to lose our exalted status as the the most "highly evolved" creature on the planet. We better position our laws and social mechanisms in such a way that all persons will be protected when the time comes (the caveat being that we'll actually have a say in the matter once we hit that Singularity point).

I think perhaps the most important thing to keep in mind while discussing 'personhood' is that there is no fact of the matter as to whether or not something is a person, since 'people' are not part of the 'furniture' of the universe. Any delimitation of 'personhood' must, by the concept's nature, be provisional, and can only be defined in relation to the larger culture.

To illustrate: I can't see as how Homeric man, had he any interest in the question of personhood, would include 'self-awareness' or 'self-control' on the list of essential attributes of personhood. What use would a man whose destiny was bound up with the whims of the gods have for these things? If anything, they might be seen as a privation rather than an attribute.

Any visceral reaction one might have which cries out 'The line must be drawn here!' on the question of personhood is as ungrounded as the reactions of disgust anti-abolitionists had toward emancipation. So then how can we properly address the problem of personhood?

Excellent. I once had the opportunity to hear Jane Goodall speak; I suspect she'd be in your corner on this.

I know some humans who don't meet those fifteen criteria.

Good that someone took a stab at a list, though something like the DSM IV model (if you have 8 out of the following 15, or such) might work. There are plenty of times when I lose sense of self and time during meditation, or illness. People change, and then change again, so I'd really like to be grandfathered in once I initially qualify for personhood:) It would be unfortunate to lose my rights, and be carried away during sleep or other changeable moment. Of course, I'm goofing on this now, but the topic certainly invites creative thought. It's worth going back to school for this, better yet, just write on this, George! Fascinating. Thanks for bringing it up. We apes who visit your site regularly are ready to help out.

(And, i thought lack of "a sense of futurity" was a definition of immaturity.)

Jayar what about Homo Sapiens do I need a culture to set a boundary on that?
“Moreover, individuals, at one time or another, are not persons.”

As noted by George this and other criteria of personhood often miss many humans that aren’t technically persons. Some accounts consider sleeping persons non persons or even babies. If you then slide to sentience you open the book to other non person sentient species. Which I think George wouldn’t mind.

Jayar,
I like what you've stated. The first time I heard of concepts related to personhood were on Orson Scott Card's Ender Books. As you've indicated, and as Card has indicated, an entities 'personhood' is not determined by the object but by the observer. See:
http://en.wikipedia.org/wiki/Concepts_in_the_Ender%27s_Game_series#Hierarchy_of_Alienness

Hmmm ...
A conscious individual who initiates force, threat or coercion against one of s/his own species is an immoral member of that conscious species. Put another way, default to brute force belittles a conscious being's 'civilization', wherein such behavior is an offense to every member's valid expectation of what ought to be considered a valid action of a conscious being whose primary survival tool is consciousness, which needs not initiate immorality in order to survive/thrive ~ else it is de-facto not a civilization.

In terms of non-humans, when a beast initiates such behavior, it is generally considered to be an amoral act by a non-conscious member of Earth's natural kingdom. In other words, the rules of 'civil' behavior do not apply to that species, and it is ascribed allowances (by we conscious beings) in order for it to be enabled to survive and thrive.

George, are you actually ascribing morality to non-conscious members of Earth's animal kingdom (ie, members of species whose primary survival tool is not consciousness), or is it possible you are merely reducing 'personhood' to a level where morality is superfluous?