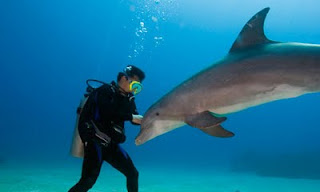 A new approach combining marine biology with artificial intelligence reveals that we may be be closer to conversing with dolphins than we think. Denise Herzing of the Wild Dolphin Project in Florida, and Thad Starner, an artificial intelligence expert at Georgia Institute of Technology in Atlanta, are working on a project called CHAT (Cetacean Hearing and Telemetry project) that may finally allow for our two species to communicate:


Starner and some of his students are now developing a smartphone-sized computer, that will be worn across a diver's chest in a waterproof case. The device will be connected to two hydrophones, capable of picking up dolphin sounds underwater - including those beyond the range of human hearing. As it can be difficult for humans to identify the source of underwater sounds, an arrangement of LED lights within the diver's mask will indicate the direction from which the various clicks and squeals are originating.

Not only will the computer hopefully be able to decode and indicate what the dolphins are saying, but by using a handheld Twiddler (sort of a combination mouse and keyboard), the diver will be able to select and send out audible dolphin-ese responses.

Before any interspecies conversations can take place, however, the team first needs to figure out the animals' vocabulary. In order to do so, they plan on running recordings of dolphin vocalizations through a pattern detection algorithm, designed by Starner. The system analyzes data, picks out deviations from the norm, then groups similar deviations together. It is hoped that by observing dolphins, and seeing which recurring deviant sounds accompany which behaviors and situations, the researchers will be able to identify specific "fundamental units" of dolphin speech.