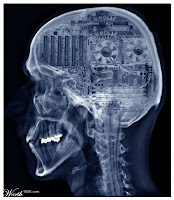 Chris Chatham has penned an article in which he outlines 10 important differences between brains and computers. It's an interesting post and I recommend that you give it a read. Here's a quick overview:
Okay, fair enough. But there's something deeply unsatisfying about Chatham's distinctions. It's an apples and oranges kind of thing in which we're still largely talking about fruit.

Sure, computers today can't really be compared to human brains for exactly the reasons Chatham outlines. Computers don't create minds in the ways that brains do (at least not yet). But it's folly to suggest that brains aren't a kind of computer—a computer for the lack of a better word that we haven't quite figured out yet. And it's very likely that, as our information technologies and artificial intelligence theories progress, our computers will increasingly come to resemble human brains.

It's still computation, after all. The functionalist approach to cognition suggests that the brain is likely churning away just like any other Turing Machine; it's still adhering to the Church-Turing theory of computational universality. It just happens to crunch numbers exceptionally well with meat and produce this remarkable thing we call mind.
Posted by George at 5/22/2011

some of the new advances in computers are impressive, everyday is a big leap towards new technology.