The short list and winner of the 2010 Royal Society Prize for Science books has been announced: 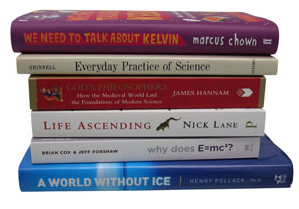 A World Without Ice by Henry Pollack (Avery Books, Penguin Group)
Explores the relationship between ice and people – the impact of ice on Earth, its climate, and its human residents, as well as the reciprocal impact that people are now having on ice and the climate.

The judges said: “A thoughtful and refreshing book that brings ice to life. Well researched and with a personal feel this book is an excellent alternative route into understanding the issues around climate change. Fascinating, accessible and very powerful.”

Everyday Practice of Science: Where Intuition and Passion Meet Objectivity and Logic by Frederick Grinnell (Oxford University Press)
An insiders’ view of real-life scientific practice describing how scientists bring their own interests and passions to their work and illustrating the dynamics between researchers and the research community.

The judges said: “How is science done? This book looks behind the scenes and tells the story of what makes scientific minds tick and how scientific theories are made. A fascinating, personal account – essential reading for anyone with an interest in science, from pupil to politician.”

God’s Philosophers: How the medieval world laid the foundations of modern science by James Hannam (Icon Books)
Revives the forgotten philosophers, scientists, scholars and inventors of medieval Europe, revealing the Medieval Age to be responsible for inventions and ideas that would change the world forever.

The judges said: “A vibrant insight into the medieval approach to science, full of wonderful anecdotes and personalities. Dispelling common myths about the ‘dark ages’, this is a very readable book about a neglected era in the history of science. It very much fills a gap, making you realise that the great scientific achievements of the Renaissance are in debt to the "philosophers" prepared to sacrifice long held beliefs and frequently their lives for their ideas.”

Life Ascending by Nick Lane (Profile Books)
Charts the history of life on Earth by describing the ten greatest inventions of life, based on their historical impact, their importance in living organisms and their iconic power.

The judges said: “An elegant and adventurous step-by-step guide to what makes life the way it is. With a pleasing overarching structure, it is a beautifully written book and an extremely rewarding read.”

We Need To Talk About Kelvin by Marcus Chown (Faber and Faber)
Takes familiar features of the world we know and shows how they can be used to explain profound truths about the ultimate nature of reality.

The judges said: “Your everyday world will never look the same again after reading this inspiring book. Reflections in the window, the warm rays of the sun – all are used to explain ideas of advanced physics, from the atom to the big bang, and show how physics forms part of our everyday world.”

Why Does E=mc2? by Brian Cox and Jeff Forshaw (Da Capo Press, Perseus Books Group)
An illuminating journey to the frontier of 21st century science to consider the real meaning behind Einstein’s most famous equation, E = mc2.

The judges said: “This book takes the world’s most famous equation apart and puts it back together again in a way that is lively and understandable. We were delighted to find our knowledge of equations - long forgotten since leaving school for some of us – reinvigorated and felt ourselves rediscovering our enjoyment of mathematics.”

As an aside, I will soon be receiving all six of these books compliments of New Scientist. I won a contest in which readers were asked to name the most underrated science book written for a general audience. My pick of K. Eric Drexler's Engines of Creation was my choice.
Posted by George at 10/22/2010