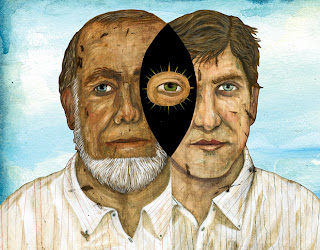 Wired contributors Steven Johnson and Kevin Kelly have recently released books on the history of innovation in which they argue that great discoveries typically spring not from individual minds but from the hive mind.

In Johnson's book, Where Good Ideas Come From: The Natural History of Innovation, he draws on seven centuries of scientific and technological progress, from Gutenberg to GPS, to show what sorts of environments nurture ingenuity. Johnson reveals that great creative milieus, whether MIT or Los Alamos, New York City or the World Wide Web, are like coral reefs—teeming, diverse colonies of creators who interact with and influence one another.

Kelly’s book, What Technology Wants, looks back over some 50,000 years of history and peers nearly that far into the future. His argument is similarly sweeping: Technology can be seen as a sort of autonomous life-form, with intrinsic goals toward which it gropes over the course of its long development. Those goals are much like the tendencies of biological life, which over time diversifies, specializes, and (eventually) becomes more sentient.

Wired recently brought the two together for a discussion, and it's a must-read:


Kelly: I think there are a lot of ideas today that are ahead of their time. Human cloning, autopilot cars, patent-free law—all are close technically but too many steps ahead culturally. Innovating is about more than just having the idea yourself; you also have to bring everyone else to where your idea is. And that becomes really difficult if you’re too many steps ahead.

Johnson: The scientist Stuart Kauffman calls this the “adjacent possible.” At any given moment in evolution—of life, of natural systems, or of cultural systems—there’s a space of possibility that surrounds any current configuration of things. Change happens when you take that configuration and arrange it in a new way. But there are limits to how much you can change in a single move.

Kelly: Which is why the great inventions are usually those that take the smallest possible step to unleash the most change. That was the difference between Tim Berners-Lee’s successful HTML code and Ted Nelson’s abortive Xanadu project. Both tried to jump into the same general space—a networked hypertext—but Tim’s approach did it with a dumb half-step, while Ted’s earlier, more elegant design required that everyone take five steps all at once.

Johnson: Also, the steps have to be taken in the right order. You can’t invent the Internet and then the digital computer. This is true of life as well. The building blocks of DNA had to be in place before evolution could build more complex things. One of the key ideas I’ve gotten from you, by the way—when I read your book Out of Control in grad school—is this continuity between biological and technological systems.

Kelly: Both of us have written books on this idea, on the primacy of the evolutionary model for understanding the world. But in What Technology Wants, I’ve actually gone a bit further and come to see technology as an alternative great story, as a different source for understanding where we are in the cosmos. I think technology is something that can give meaning to our lives, particularly in a secular world.

Johnson: One thing I love about your book is that by the end, you’ve moved from discussions of cutting-edge technology to this amazingly grand vista of life and human creation. It’s very rare to have a book about technology that is moving in that way—that has this almost spiritual component to it. Really, it’s kind of the anti-Unabomber manifesto.

Kelly: As I started thinking about the history of technology, there did seem to be a sense in which, during any given period, lots of innovations were in the air, as it were. They came simultaneously. It appeared as if they wanted to happen. I should hasten to add that it’s not a conscious agency; it’s a lower form, something like the way an organism or bacterium can be said to have certain tendencies, certain trends, certain urges. But it’s an agency nevertheless.

Johnson: I was particularly taken with your idea that technology wants increasing diversity—which is what I think also happens in biological systems, as the adjacent possible becomes larger with each innovation. As tech critics, I think we have to keep this in mind, because when you expand the diversity of a system, that leads to an increase in great things and an increase in crap.

Ideas such as this are finally gaining wider acceptance. They are discussed in a wider context in "Unusual Perspectives" and in my newly published work "The Goldilocks Effect : What Has Serendipity Ever one For Us?". More info to be found on the Unusual Perspectives website.