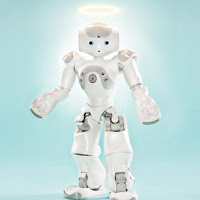 Michael and Susan Anderson have published an article on Machine Ethics (ME) in the October issue of Scientific American. In the article, Robot Be Good: A Call for Ethical Autonomous Machines, they introduce both ME and their recent work programming ethical principles in Nao, a humanoid robot which was developed by the French company Aldebaran Robotics.

Their findings in brief:

Simply programming a set of rules into robots may work for a while, but only if they're less intelligent than a human and are incapable of networking with one another (don't want a Geth rebellion). But with AI's that have human-level complexity or above you would probably have to give them compassion, which might be difficult as you could program it to recognize emotional responses and a list of proper responses and create a sociopath.