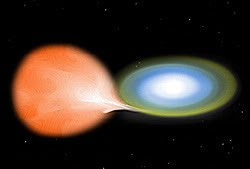 We've known for a long time that supernovae produce gamma-rays, but until now it was assumed that novae lacked the power to emit such high-energy radiation. This is bad because novae occur at much greater frequency than super- and hypernovae; we are therefore at a much greater risk of being wiped out by a blast of gamma-ray radiation than previously thought.

The Milky Way experiences about 30 to 60 novae per year, with a likely rate of about 40. Roughly 25 novae brighter than about magnitude 20 are discovered in the Andromeda Galaxy each year and smaller numbers are seen in other nearby galaxies.

Contrast that with supernovae which occur about five times every hundred years.

A nova event should not be confused with a supernova. It is a cataclysmic nuclear explosion caused by the accretion of hydrogen onto the surface of a white dwarf star, which ignites and starts nuclear fusion in a runaway manner. A supernova, on the other hand, is a stellar explosion that is more energetic than a nova. Supernovae are extremely luminous and cause a burst of radiation that can outshine an entire galaxy before fading from view over several weeks or months. During this short interval a supernova can radiate as much energy as the Sun is expected to emit over its entire life span. The explosion expels much or all of a star's material at a velocity of up to 30,000 km/s (10% of the speed of light), driving a shock wave into the surrounding interstellar medium.

Though not as powerful as a supernova, novae are still immensely energetic, emitting the equivalent of about 1,000 times the energy emitted by our Sun every year. And now we can add gamma-rays to its list of nasty excretions.

To say that a gamma-ray blast would be bad for us here on Earth would be a gross understatement. Combined with the effects of a cataclysmic stellar explosion, it is one of the most powerful forces in the Universe, able to sterilize massive swaths of the galaxy. Supernovae can shoot out directed beams of gamma-rays to a distance of 100 light years, while hypernovae disburse gamma ray bursts as far as 500 to 1,000 light years away.

As for novae, the explosion creates a hot, dense, expanding shell called a shock front, composed of high-speed particles, ionized gas and magnetic fields. These shock waves expand at 7 million miles per hour—or nearly 1% the speed of light. The magnetic fields trap particles within the shell and whip them up to tremendous energies. Before they can escape, the particles reach velocities near the speed of light. Scientists say that the gamma rays likely result when these accelerated particles smashed into the red giant's wind.

Previous to this discovery, it was known that the remnants of much more powerful supernova explosions can trap and accelerate particles like this, but no one suspected that the magnetic fields in novae were strong enough to do it as well. Supernova remnants endure for 100,000 years and produce radiations that affect regions of space thousands of light-years across.

These explosions produce highly collimated beams of hard gamma-rays that extend outward from a nova or supernova. Any unfortunate life-bearing planet that should come into contact with those beams would suffer a mass extinction (if not total extinction depending on its proximity to the event). Gamma-rays would eat up the ozone layer and indirectly cause the onset of an ice age due to the prevalence of NO2 molecules.

Have no fear! The probability of just the earth being hit by a gamma ray *beam* is very, very, very ... er ... very small. The expanding shell thins out more and more in the distance and diffuses in the interstellar medium.

By the way, each nova or super nova, respectively, destroys many of those artificially intelligent, self replicating, killer probes sent out by certain evil alien civilizations, and this could as well be a part solution of the Fermi paradox. Sigh of relief!

Perhaps, but what is the likely effective range of the sterilization? If it's just a few light-years, then we only need to worry about Proxima Centauri going nova. And since that's a red dwarf and not a white one, the chance of that seems pretty much nil.

"... what is the likely effective range of the sterilization?"

Let's make a gross calculation. The amount of power that the Sun deposits on an unprotected area (i.e. without atmosphere) at the distance of the earth at 1 AU (Astronomical Unit) is equal to approximately 1367 W/m/m (Watt per square meter).

This value is the power per unit area we would get from a typical nova five light years away, additionally to what we get from the Sun. Disappointed?

And ... sterilization? Novae and supernovae create heavier elements and later make it possible that living beings exist on certain planets. This is the opposite of sterilization.