NYT: The first church of robotics 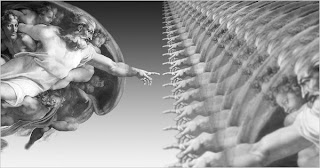 Computer scientist and technology critic Jaron Lanier offers his two cents on the silicon valley mindset in his op-ed, "The first church of robotics." Excerpt:

The answer is simply that computer scientists are human, and are as terrified by the human condition as anyone else. We, the technical elite, seek some way of thinking that gives us an answer to death, for instance. This helps explain the allure of a place like the Singularity University. The influential Silicon Valley institution preaches a story that goes like this: one day in the not-so-distant future, the Internet will suddenly coalesce into a super-intelligent A.I., infinitely smarter than any of us individually and all of us combined; it will become alive in the blink of an eye, and take over the world before humans even realize what’s happening.

Some think the newly sentient Internet would then choose to kill us; others think it would be generous and digitize us the way Google is digitizing old books, so that we can live forever as algorithms inside the global brain. Yes, this sounds like many different science fiction movies. Yes, it sounds nutty when stated so bluntly. But these are ideas with tremendous currency in Silicon Valley; these are guiding principles, not just amusements, for many of the most influential technologists.

It should go without saying that we can’t count on the appearance of a soul-detecting sensor that will verify that a person’s consciousness has been virtualized and immortalized. There is certainly no such sensor with us today to confirm metaphysical ideas about people, or even to recognize the contents of the human brain. All thoughts about consciousness, souls and the like are bound up equally in faith, which suggests something remarkable: What we are seeing is a new religion, expressed through an engineering culture.

What I would like to point out, though, is that a great deal of the confusion and rancor in the world today concerns tension at the boundary between religion and modernity — whether it’s the distrust among Islamic or Christian fundamentalists of the scientific worldview, or even the discomfort that often greets progress in fields like climate change science or stem-cell research.

If technologists are creating their own ultramodern religion, and it is one in which people are told to wait politely as their very souls are made obsolete, we might expect further and worsening tensions. But if technology were presented without metaphysical baggage, is it possible that modernity would not make people as uncomfortable?

"My final historical conclusion is, then, that the separation of science from spirituality was necessary -- necessary in order that science could develop to the point it has today. Science is like a child who had to leave his home town for a few years, in order to develop into an adult. Once an adult, he can return home happily. Science is now mature. Science can return home now and takes its place with the rest of human experience. It is in the process of doing so. We can help it along."

I can get into a great long spill why this is happening, yet I doubt anyone cares... in either case very interesting.