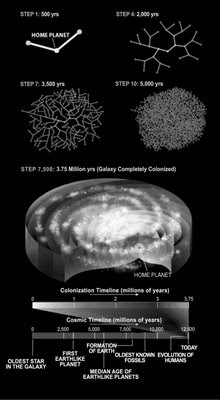 Thanks to George Dvorsky for inviting me to blog this week on Sentient Developments.

The title of this post refers to a classic 1983 paper of Sagan and Newman criticizing Tipler's skepticism toward SETI studies based on Fermi's Paradox (FP) and strengthened by the idea of colonization via von Neumann probes. Here, however, I would like to talk about solipsist solutions to FP in a different – and closer to the usual – meaning.

Solipsist solutions reject the premise of FP, namely that there are no extraterrestrial civilizations either on Earth or detectable through our observations in the Solar System and the Milky Way thus far. On the contrary, they usually suggest that extraterrestrials are or have been present in our vicinity, but that the reasons for their apparent absence lie more with our observations and their limitations than with the real state-of-affairs.

Of course, this has been for so long the province of lunatic fringe of science (either in older forms of occultism or more modern guise of ufology) but to neglect some of these ideas for that reason is giving the quacks too much power. Instead, we need to consider all the alternatives, and these clearly form well-defined, albeit often provably wrong or undeveloped ideas. Some of the solipsist hypotheses discussed at least half-seriously in the literature are the following (listed in rough order from less to more serious ones):
It is difficult to objectively assess the value of solipsist hypotheses as solutions to FP. Most of them are either untestable in principle, or testable only in consideration of very long temporal and spatial scales; they do not belong to the realm of science as it is conventionally understood.

In other words, they violate a sort of naive realism which underlies practically the entire scientific endeavor. Their proponents are likely to retort that the issue is sufficiently distinct from other scientific problems to justify greater divergence of epistemological attitudes – but this is rather hard to justify when one could still pay a smaller price. For instance, one could choose to abandon Copernicanism, like the Rare Earth theorists (although it might be particularly unpopular this year!) or – as I personally prefer – one might abandon gradualism (which has been thoroughly discredited in geo- and planetary sciences anyway) and end up with a sort of neocatastrophic hypothesis, like the phase-transition scenario.

Some of them, but not all, solipsist solutions violate the classical non-exclusivity (or “hardness”) requirement as well; in other words, they require an uncanny degree of cultural uniformity among the advanced technological civilizations. This is, for instance, obvious in zoo, interdict or planetarium scenarios, since they presume a large-scale cultural uniformity to maintain the isolation of either just us or any other Galactic newcomers, which is sufficiently improbable a priori.

This is not the case, however, with the simulation hypothesis, since the simulated reality is likely to be clearly designed and spatially and temporally limited. The directed panspermia has some additional problems – notably the absence of any further manifestations of our 'parent civilization', in spite of its immense age. If they became extinct in the meantime, what happened with other seeded planets (not to mention long-term astroengineering artifacts)? The Copernican reasoning suggests that we should expect evolution to occur faster at some places than on Earth (and, of course, slower at other sites as well); where are our interstellar siblings, then?

Usually, these hypotheses are mentioned (if at all) mostly for the sake of logical completeness, since they are in any case the council of despair. If and when all other avenues of research are exhausted, the conventional wisdom says, we could always turn toward these hypotheses. And, strangely enough, the conventional wisdom does seem on target here. Still, this neither means that they are all of equal value nor it should mislead us into thinking that they are necessarily improbable for the reason of desperation alone.

Bostrom's simulation hypothesis might, indeed, be quite probable, given some additional assumptions related to the increase in our computing power and decrease of information-processing cost. Directed panspermia could, in principle, get a strong boost if, for instance, the efforts of NASA and other human agencies aimed at preventing planetary contamination turn out to be unsuccessful. Finally, solipsist hypotheses need not worry about evolutionary contingency or generic probabilities of biogenesis or noogenesis, unlike practically all other proposed FP solutions.

The simulation hypothesis is actually much older than Descartes -- it's a variation on "we are dreams in the minds of a god" myth which shows up in several cultures.

I like the phase transition concept, though just like parallel or bubble universes, it's essentially untestable (unless it left behind some kind of echo equivalent to the cosmic background radiation).

Personally I just think that space is really big. Keep in mind that it took billions of years for sapient life to evolve on earth and it's possible that we'll stop using radio in a century or two. And how does one know that species with the technology to build von Neuman probes will actually build them.

@Athena
Thanks for the comment -- you're certainly right that the motive appears in mythology. I wished just to cite its first appearance in rational thought (philosophy/science).

As for the tests of phase transition, we have listed some of them in that paper in OLEB, though admittedly most are on a rather long leash. Apart from actual contact with a civilization of similar effective age, the most important testing will come from investigations of less eroded environments in the Solar system. This should give ample evidence of high-energy gamma- and cosmic-ray bombardment episodes approximately coincident with some of the terrestrial extinction events...

@ZarPaulus
Thanks for the comment! We don't know, of course. But the non-exclusivity is critical here: it's not that all species with vN probes knowledge will launch them - the problem is why (apparently) none has done that so far.

Just to play devil's advocate, I would like to point out that the zoo hypothesis doesn't necessarily require "uniformity of culture among galactic races", it only requires a single, relatively powerful race local to our area of space (or a collection of races with a common interest) which is capable of enforcing it on everyone else who might have been interested in "violating" our space so far. Yeah, I know that it's probably not too likely either, but it's much more likely than uniformity of culture.

And, you know, unlikely things do happen. Otherwise no one would get struck by lightning or win the lottery.

Von Neumann probes are mentioned many times in FP articles, but has anyone done some thinking about how advanced technology you need to build those probes ?

My guess is you need a close to singularity civilization.

What motivations would such species have to send Neumann probes ?

Interesting, but how is any of these hypotheses, other than Bostrom's simulation argument, considered solipsist? Just curious, it doesn't fit my understanding of the word at all. Actually I'd always found the Fermi Paradox to be highly presumptive, that aliens would be using technologies related to what humanity could use or detect. We've still just got 50 years of being in space ourselves. I also don't find arguments that humans or any other intelligent species would mindlessly spread across the cosmos like bacteria very compelling.

Well, unless and until we actually travel outside the solar system, we're working with a sample size of zero in any case.

@Martin Andersen
Well, von Neumann himself thought it would need about a century from his own time -- now it might be that he was too optimistic, but who knows, only half of that has elapsed by now!

@Chris
OK, I might not be entirely clear. The definition of Fermi's paradox stems from what Hart called "Fact A", that is the absence of detected extraterrestrials and their manifestations. That is usually regarded as an empirical fact. Now, if you hypothesize that they are here or were here, you obviously deny that (as do all proponents of the hypotheses listed). Solipsism means the opposite of what philosophers usually denote as naive realism or direct sense realism. It is my view that denying naive realism about (non)existence of extraterrestrial manifestations can be called solipsist *about extraterrestrials*. This does not presume that proponents of these hypotheses are realists about other subjects, of course.

I think we need to be cautious before saying that to advance the conjecture that life here on Earth is unique to the visible universe is to "abandon Copernicanism". The apparent absence of alien life within our cosmological horizon may instead simply be an expression of the Copernican principle. Maybe most Hubble volumes are sterile; and in the vast majority of Hubble volumes where life does emerge, primordial life emerges only once. If so, then our (apparent) loneliness would be typical - and the principle of mediocrity isn't violated.

The above speculation could of course be overtaken by an improved understanding of conditions on early Earth. But I've read a number of sketches of how the RNA world might have conceivably arisen - and the emergence of (primordial) information-bearing self-replicators from an abiotic world still strikes me as fantastically improbable. However, I should add I'm not a chemist!

Ribozymes are very short RNAs that self-replicate. So such molecules can arise from abiotic precursors. Also, if primordial life emerges in a universe, unless all its components and context are completely unique (de facto not true for physics, chemistry and geology, biology pending) it will arise elsewhere.

As someone already said, the zoo hypothesis should not be rejected based on assumption not all civilizations would obey the rules. It only requires one race (or alliance of races) powerful enough to force others to follow their rules.

The best solution to Fermi paradox I can imagine is combination of zoo hypothesis and ubiquitous von Neumann probes. A civilization can build "good" or "bad" VN probe - bad meaning a probe that doesn't control it's replication speed, consumes planets harboring life and even attacks other civilizations. The only way for ethical civilization to control the situation is to build it's own von Neumann probe. Sounds like a paradox but ir isn't. That is the only way to find the possible rogue probes and destroy the bad guys before it is too late. The only thing that can destroy exponentially growing cancer is exponentially growing cure.

Therefore I believe most technological civilizations launch their own von Neumann probe as soon as possible, for a fear of rogue probes.

After the probes are operating, why would a civilization bother to communicate with radio with other civilizations? It will get tremendous amount of data about universe from it's own probes.

There is a quite lengthy discussion about this on BAUT forum.