New theory may explain why radio SETI has failed 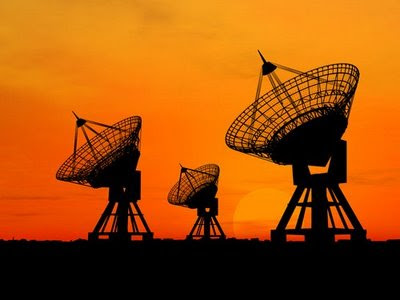 It's been nearly 50 years since scientists first started scanning the heavens for radio signals that would indicate the presence of intelligent extraterrestrial life. And in all those 50 years we haven't heard so much as a peep. The apparent failure of radio SETI thus far has provided much of the fuel that now powers the Fermi Paradox, the observation that we haven't encountered signs of ETI's when we probably should have by now.

But a new theory may explain part of the problem and why radio SETI has so far proved fruitless. Reginald Smith from the Bouchet-Franklin Institute in Rochester argues that there is a limit to how far a radio signal from ET can travel before it becomes too faint to hear. If true, this could have interesting ramifications for radio SETI and our expectations for the project.

In his article, "Broadcasting but not receiving: density dependence considerations for SETI signals,"Smith applies his idea to the Drake Equation and derives a minimum density of civilizations below which contact is improbable within a given volume of space. The calculation depends on factors such as the lifetime of a civilization and the distance that it might be possible to communicate via radio signals. His thesis has produced some interesting scenarios.

Consequently, if there are less than 300 advanced civilizations in our galaxy, the chances are that they’ll never notice each other. And a figure of N being less than 300 is not out of the question given recent insights into cosmology, astrobiology and the rise of the Rare Earth Hypothesis.

Smith's theory has led some to suggest that the Fermi Paradox has been solved. But their thinking here is flawed.

Our (apparent) inability to detect radio signals does not wipe away other means for extraterrestrial communication (quantum communication schemes, Bracewell probes) or detection (Dysonian SETI, interstellar calling cards, etc.), nor does it answer the issue as to why the Galaxy hasn't been colonized by now (i.e. self-replicating Von Neuman colonization probes).

So, while Smith's theory may explain the failure of radio SETI, it doesn't erase the problem of the Great Silence.
Posted by George at 2/04/2009

Here's a theory I had about the reason why the universe seems so empty:

I think the minimum density is 300 CC's in the galactic neighborhood (10,000 light year radius), which is just a small fraction of the entire galaxy.

As I said in my review of Rare Earth, the Rare Earth theory is neither hypothesis nor prediction, but merely a description of how life arose on Earth. One of the major consultants for the book, Guillermo Gonzalez, is a creationist who presented his religious views as scientific facts.

The Rare Earth theory is not emerging, it's subsiding. As instruments and techniques get better, we will find earth-like planets -- we are on the verge. At that time, I hope that this bogus "theory" will finally be laid to its well-deserved rest along with its sibling, the anthropic principle.

While I share people's frustration with the lack of any evidence of advanced civilizations in the galaxy, I think that's all it is: frustration, born of impatience. For me, the "great silence" might just as well be called "The great lack of immediate gratification in our brief and perfunctory search for ETI"

Why would a civilization send a message through ordinary 3 dimensional space when there are far better and faster ways? "The fault; dear Brutus; lies not in the stars"...

They aren't here because the earth is unremarkable. Humans seem to have a hard to dealing with our unspecial-ness. If I may use an old analogy: Would you bother going out to observe some anthill way out in the fields if there are a 1000 anthills much closer to home that are almost exactly alike? You might walk past an anthill once, note its location and then move on. Aliens could have been here a millions times over the past millenia. Very inlikely they must be here NOW, within this tiny speck of time we have been watching. Also, communication mediums change and the odds of us catching a radio comm-ring of some civ within this tiny spec of time is remote.

it may also be due to increased signal degradation over greater distances which turns our signals (as well as et's) into noise. there are probably practical (and perhaps insurmountable) limits to the distance that any civilization may colonize outside it's home solar system (velocity limitations due to the theory of special relativity, as well as limitations due to bone demineralization, fueling difficulties and ship maintenance and repair, the danger of high velocity impacts to spacecraft from even small objects, radiation exposure, etc.)