Seth Lloyd: Quantum computers will 'undo the present and recall the past' 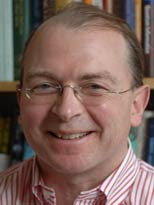 One of my favorite answers to this year's Edge.org question was given by quantum mechanical engineer Seth Lloyd. Like so many other respondents, he chose an answer directly related to his field. But in Lloyd's case, the suggestion that quantum computers will 'change everything' may actually be right on the mark.

While quantum computers afford their users protection and anonymity that classical computers cannot, even classical computers can be programmed to share this ability to erase regret, although they currently are not. Although classical computers dissipate heat and operate in and a physically irreversible way, they can still function in a logically reversible fashion: properly programmed, they can un-perform any computation that they can perform. We already see a hint of this digital nostalgia in hard-disk 'time machines,' which restore a disk to its state in an earlier, pre-crash era.

Suppose that we were to put this ability of computers to run the clock backward to the service of undoing not merely our accidental erasures and unfortunate viral infections, but to undoing financial transactions that were conducted under fraudulent conditions? Credit card companies already supply us with protection against theft conducted in our name. Why should not more important financial transactions be similarly guaranteed? Contracts for home sales, stock deals, and credit default swaps are already recorded and executed digitally. What would happen if combined digital finance with reversible computation?

Lloyd offers an example where, if a logically reversible computer were used to record a financial contract and to execute its terms, and if the parties were not satisfied with the way those terms were executed, then those terms could be 'un-executed,' any money disbursed, reimbursed, and the contract deleted, as if it had never happened. He calls it a 'digital time machine.'

Lloyd argues that he has the law of physics and computation on his side and that the only inhibitor may prove to be human nature.

This reminds me of the claim that quantum computers even work when they're turned off in our universe because they're on in other universes.

I am not a quantum computer engineer ... but I do believe that reversible computation could be realized with conventional computation techniques. IMHO the barrier is not technical but it is mental since it is a complete shift of how we currently write software. Of course quantum computation may sell these ideas which were previously not considered.

(Disclaimer: I am not a quantum computer engineer) Reversible computation can be realized even with conventional computing techniques. What it does require is a complete rethink of how we program software and manage systems. Quantum computing may help sell these ideas but I don't think are required to enable them.