Larger Milky Way has implications for the Drake Equation and the Great Silence -- or does it? 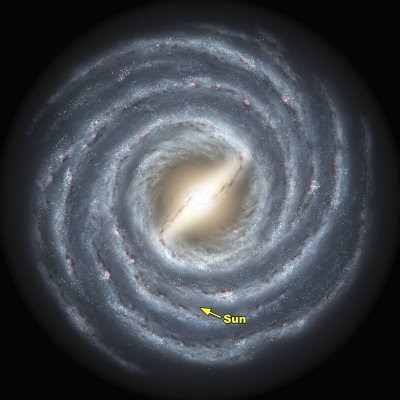 Apropos of Russell Blackford's recent posts about the Fermi Paradox, it should be mentioned that the Milky Way is 50% larger than previously thought. This will likely have implications to our appreciation of the Drake Equation and the Fermi Paradox.

What tipped cosmologists off was the discovery that our galaxy is spinning 15% faster than formerly assumed. The lead researcher on the project, Mark Reid of the Harvard-Smithsonian Center for Astrophysics in Cambridge, estimates that the Milky Way's spin is about 914,000 km/hour, significantly higher than the widely accepted value of 792,000 km/hour.

The only thing that could account for this increased spin rate was more mass -- a lot more mass. As a result of Reid's findings, our models now need to account for a galaxy that is 50% heavier, 15% wider and contains a mind-boggling 3 trillion stars! That is an astounding 750% increase from 400 billion.

You might want to pause for a moment and think about this.

This is remarkable news and the implications of these findings are going to take a while to sink in. My first reaction was to consider the implications to the Fermi Paradox. Does a significantly larger Milky Way accentuate or diminish the problem that is the Great Silence?

First off, it throws previous Drake Equation estimates out the window. Blogger Paul Hughes has already crunched some numbers and has come up with his own estimate: he believes there may be as many as 12 billion Earth-like planets in our galaxy capable of supporting liquid water and in turn carbon-based life as we know it (Hughes doesn't take the equation beyond that as he was inquiring into the number of potentially habitable planets).

But as many of my readers know, I'm not a great fan of the Drake Equation to begin with. It's in dire need of an upgrade and it completely fails to account for the cosmological development of the galaxy and other temporal aspects. That said, it's safe to assume that the probability of extraterrestrial life emerging in the Galaxy is now significantly higher than it was before -- both in the Galaxy's long history and now.

Second, the new and improved Milky Way throws off previous calculations as to how long it would take an advanced civilization to inhabit all four corners of the galaxy. An extraterrestrial migration wave would likely be comprised of self-replicating colonization probes that spread out across the galaxy at an exponentially increasing rate. Previous estimates placed complete Galaxy-wide colonization at a few million years. Given that we were wrong about the size of the Milky Way and the number of stars, we have to conclude that it would take longer to colonize the entire galaxy.

Just how much longer I'm not sure [sounds like a future project in the making], but given that we're talking about exponentially increasing migration rates I would have to think that we are not talking about an order of magnitude. And even if it does take significantly longer, we still have to take the extreme age of the Milky Way into consideration and the likelihood that intelligence may have emerged in the Galaxy as long as 4.5 billion years ago. The age of the Galaxy is still disproportionately longer than even the most pessimistic colonization rate estimates.

Well, nothing really. The Great Silence is obviously still in effect and something's still screwy with the Universe. A bigger Milky Way means that there's likely more intelligent life in the Galaxy than we had previously assumed, but that interstellar colonization and communication rates are slightly longer.

Wonderful. More planets. The greater the possibility of more life in the galaxy. The greater the odds there is or are one or more Borg-like folks out there ready, willing and able to assimilate our species.

If Star Fleet could barely stop the Borg how can our puny selves be expected to do so?

Yeah, it can't be an order of magnitude because all the standard figures that get thrown around are so approximate anyway. I'm working with a diameter of 100,000 light years - not sure whether that's up-to-date, but it was always an approximation. Even if you doubled that figure it would still only mean that something moving from the centre to the rim at .01 c now takes 10 million years rather than 5 million. The timeframe for colonising the galaxy isn't going to change by an amount that solves the problem.

But of course, you're also saying that. :)

The point you make is correct that the new analysis greatly increases not the distances to be traversed but the number of star systems and planets involved - perhaps even by an order of magnitude. So what changes isn't the likelihood that an advanced technological species Out There could colonise the galaxy to an extent likely to be visible to us, so much as the a priori probability that such a civilisation could come about in the first place. This seems to "improve" by up to an order of magnitude.

I'm not sure what to make of that. My immediate feeling is that it doesn't make a heckuva lot of difference because, if we give any credence to the Drake equation, we're already faced with a whole lot of variables whose actual order of magnitude we don't even have a clue about. The main thing about the Drake equation is that it brings this point home, even though it's of no practical use.

Still, the new analysis does kind of rub in the initial paradox. There's a lot of stars out there! Even more than we thought, i.e. maybe even of the order of 10^12 rather than 10^11 (hope I counted up my zeroes correctly). It's an awful lot of places that are initial candidates for a space-faring civilisation to come about in advance of us. So why hasn't it?

What if the probes have arrived already, they look like us, and they have a plan?

@Anonymous You're thinking too small. We're talking about post-Singularity machine minds that will sweep thru the Galaxy and re-engineer all matter in its wake.

If the search for extraterrestrial beings has been limited to the concept than nothing could possibly exist at speeds greater than light, then all of a sudden we realize we were wrong about that and there is life in the high speed realm, then difference between us and the more advanced civilizations could be we are just to slow to perceive them although they are all around us creating as they pass us by. To us the light beings would just look like light and the place they live would look just like a Sun. Now isn’t it very funny that we argue about whether there is a creator, when the thing that everything emanates from shines upon us every day.

Ra Ra Ra; laugh the ancient Egyptians, and the symbol for Hydrogen is what. OOO put a dot in the center of those three two dimensional representations of spheres and the central point to it all becomes an infinitely reducing trinity of light linked to every other Sun in an infinitely expanding universe by a matrix of freeways for multiples of light speed travel AND some people say there is no GOD.

"...it all becomes an infinitely reducing trinity of light linked to every other Sun in an infinitely expanding universe by a matrix of freeways for multiples of light speed travel AND some people say there is no GOD."

Contemplating the permutations and possible ramifications of the above sends quivers to the core of my persona, tremors of conceived possibilities resonating through my cerebral essence.

If only I had a holodeck to assist in conceptualizing the various possibilities that slither into my quasi-stable mind-set.

This is all just denial. There is no solution to the speed of light problem. The cost-benefit ratio for interstellar travel is prohibitive at every level except the conversational.

I tend to agree with Jack, I feel that at a certain level of technology, travel probably becomes pointless.

However if that proves not to be the case an answer for the silence is simply stealth.

I contend that we could be living in a sort of nature preserve, much like how we defend isolated tribal cultures from contact for study and respect purposes.

It is perhaps parochial to assume that other life "colonizes" or "conquers" or "expands".
That is something humans in the 21st century might do. But advanced intelligence might remain in one place; or utilize wormhole travel to certain specific locations.

I think the real problem with the so-called 'great silence' is that we are very fixed on our anthropomorphic view of both space-time and of what entails 'civilization' and 'intelligence'. Despite the fact that we know that Earth isn't at the center of the universe, we still define it in terms of us, and that severely colors our perception. I think that as soon as we, as a species, truly come together and learn how to think outside of the box that we will find what we've been looking for. It's not a problem of 'where are they?', it's a problem of 'where are we?'