Peter Singer: The 'test-tube baby' at 30 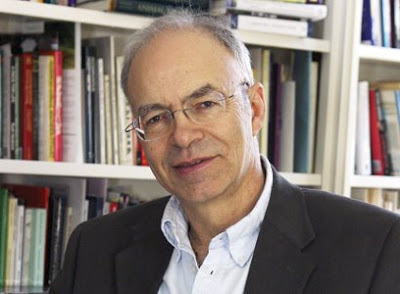 Bioethicist and philosopher Peter Singer has posted an OpEd for The Guardian in which he reflects on the 30th anniversary of the first IVF procedure, or what was known as 'test tube babies' at the time. "Deeply controversial at first," writes Singer, "IVF has fought back ethical and religious objections to become commonplace."

In the article, Singer takes the Vatican to task on their unwavering opposition to the procedure. As usual, he does a remarkable job tearing down their often nonsensical and inconsistent positions:

The Catholic church has not moved away from its opposition to IVF. In a recently released instruction, Dignitas Personae, the Church's Congregation for the Doctrine of the Faith objects to IVF on several grounds, including the fact that many embryos are created in the process, and few survive. This outcome is not, however, very different from natural conception, for the majority of embryos conceived by sexual intercourse also fail to implant in the uterine wall, with the woman often not even knowing that she was ever "pregnant."

In addition, the Vatican objects to the fact that conception is the result of a "technical action" rather "a specific act of the conjugal union." But while any couple would prefer to conceive a child without the intervention of doctors, that option is not available for infertile couples. In those circumstances, it is harsh to say to a couple that they cannot have their own genetic child at all.

It also appears contrary to the broad thrust of the church's teaching about marriage and the family as the appropriate context for rearing children. Dignitas Personae says that new human life should be "generated through an act which expresses the reciprocal love between a man and a woman." But if by that the church is referring to sexual intercourse, then it surely has an unduly narrow view of what kinds of acts can express reciprocal love between a man and a woman. Taking the several inconvenient and sometimes unpleasant steps required to have a child together by means of IVF can be, and often is, the result of a much more deliberate and reciprocally loving act than sexual intercourse.

I would say that the elegance and sophistication of Singer's religious critiques are matched by no one -- not by Richard Dawkins and certainly not by Christopher Hitchens. As an aside, be sure to read Singer's article "Good God?" to get a sense of what I mean.

Back to the Guardian article, Singer concludes by noting that there are now other more pressing ethical concerns facing IVG, including accessibility issues, who should be allowed to use it, and under what circumstances.

Email ThisBlogThis!Share to TwitterShare to FacebookShare to Pinterest
Labels: bioethics, in vitro fertilization

Here's where I get to plug my forthcoming Voices of Disbelief book, co-edited with Udo Schuklenk. Among the other goodies, we have an essay by Peter Singer and Marc Hauser.