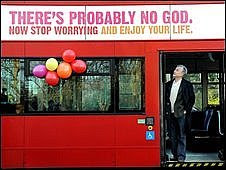 Over at Metamagician and the Hellfire Club, I've been blogging about the atheist bus.

For those who don't know about it, there's an advertising campaign going on in the UK at the moment involving buses with signs that say:

I love this slogan, and think it makes the point well. I have a lot more to say about that on my home blog. Briefly, it's a nice, gentle riposte to religious messages on buses that ask us to worry about whether we're "saved" or not, and about what's going to happen to us after death.

Of course, a message like this breaks a powerful taboo. One of the issues that has arisen from the atheist bus campaign relates to a bus driver who objected to driving a bus with this advertisement. As it happened, the bus company handled the issue in a pretty low-key way, and that was probably wise (or so I think) in this unexpected, one-off situation.

It seems that they let him go home on the Saturday afternoon when there was no other bus to drive, though it's not clear to me whether or not they docked his pay for the afternoon. According to the article that I've linked, when he returned to work on Monday he was called into a meeting with managers. He agreed to go back to work, and they agreed that he would only have to drive the buses if there were no others available. That's an attempt to accommodate his position without a commitment that he would be excused from driving the "atheist bus" if it was the only one they could assign to him. I don't mind the way this was handled, although I've seen lots of claims that management was too soft. (I'm sure there are also lots of people who think it outrageous that an employee can be directed to drive a vehicle with such a heinous, anti-Christian sign on it. Hallelujah!)

Over here at Sentient Developments, I don't so much want to get into the merits of what management should have done in this situation. But where do you draw the line? Surely we shouldn't give bus drivers a right of conscientious objection to driving buses with advertisements for products that they dislike or perhaps even consider morally abhorrent. Where does it end if you go down that path? Some will object to advertisements for various meat products, some to advertisements for sexy clothes, some to ... well, God knows what (as it were).

Can Muslim taxi drivers refuse to drive you home from the airport if you're carrying your quota of duty free alcohol? Can Catholic doctors refuse to perform abortions, even if it's necessary to save a woman's life? The possibilities go on and on, and we shouldn't be too quick to give everyone who claims to have a moral or religious scruple the right to decide what work they will or will not do. In some cases, their employer has every right to demand that they carry out the requirements of the job. In other cases, it goes beyond that: there's a strong reason in public policy to avoid people picking and choosing. E.g. a pregnant woman is in a vulnerable situation; she needs to be confident that hospital staff will not even contemplate putting her life at risk if something goes wrong. If an emergency abortion is needed, the doctors and nurses mustn't hesitate to act.

It seems to me that there are two questions here. One is a question about how managers should react when something unexpected happens that leads to a direction to an employee to perform a task that's against his or her conscience. As I said, I don't so much want to talk about that. Briefly, although I'm open to debate, I think that there was good reason for managers be understanding and cautious (if not out of compassion, at least to avoid PR and labour relations fall-out).

But the other issue relates to a more general question: just how far we should go as a society in accommodating people with religious scruples ... even scruples that stop them from doing work that they know very well is part of the job, whether it be filling prescriptions for the contraceptive pill, serving alcohol, or probably many other examples that could be given. And it's not just in the workplace. More generally, how far does your religion give you a right to conscientious objection to rules that are binding on everyone else?

This post is just to get us thinking. When I come back tonight (my time), I'm going to have quite a lot to say about what "freedom of religion" really amounts to. I don't believe it's the free pass that's often claimed. Or we shouldn't let it be.

Russell Blackford is an Australian philosopher. He has published extensively (novels, short stories, academic monographs and articles, and book reviews) and is editor-in-chief of The Journal of Evolution and Technology. His home blog is Metamagician and the Hellfire Club.
Posted by Russell Blackford at 1/19/2009

The Missed Call Of Cthulhu said...

To shift the question a little… Would we have more sympathy for the employee if it were a moral objection rather than an implicitly religious object? For instance a non-religious vegetarian takes a job as a chef at a vegetarian restaurant after being assured they will never have to handle meat, later the company that owns the restaurant decides to go in a different direction and serve meat, would we expect our vegetarian chef to quit? It’s not a legal necessity, oral promises made during the hiring process, even if made at a fairly low level, are enforceable (by the courts) and the company might have to make an exception for that chef. (Of course companies have their own protections as well…)

Back to religion, if Title VII took a page out of the Americans with Disabilities Act's play book (the suggestion of which most religious people would find highly offensive, I'd wager) a legal argument could be made that an employer would have to make a 'reasonable accommodation.' Something close to what the bus company did in the article you sited seems reasonable. (Of course, generally, courts don’t treat mental disabilities the same way they do physical disabilities…) This is a bit silly to suggest, but at least there’s some frame work that could be worked within to flesh out immerging gray areas.

Dr's are of course a completely separate matter that I agree with you entirely on.

As for the cab drivers, its my understanding that a cab driver can refuse a fare for any reason (this is especially true in the case of companies where drivers are expected to own their own cars). There was a story about this here in the states last year, I don’t recall how it resolved, I think the story came out of Chicago. (Can anyone from that area confirm that?)

I don't mind the idea of "reasonable accommodation", and I certainly don't think it's silly. In fact, I'm going to get to that issue in a couple of posts' time. I largely agree with your analogy with disability law.

But reasonableness has to be a two-way street. Also, I think that reasonable accommodation of people who for some religious or moral reason "can't" do something is kind of a separate issue sitting over the top of freedom of religion, and in the posts coming up I'm going to make an attempt to distinguish the two.

The vegetarian case you set out is interesting. Maybe in the precise circumstances you describe the chef would have a perfectly good legal case for some kind of redress - but based on contract or on some doctrine like estoppel. I'd need to think about it, but one way of looking at it is to say that the job has changed so much that the chef is now redundant (in the technical sense that we're not so much sacking him; we've actually restructured and abolished his job underneath him). In that case, it's probably unreasonable to expect him to accept redeployment to what's really quite a different job, given the importance of the prior understandings and reassurances. The company can sack the chef but it'll be legally obliged to do it by making him redundant, which in the jurisdictions I'm familiar with will give him much better benefits (and much less stigma) than if he's dismissed from employment for some other reason.

I've got no problem with people protecting themselves with legal arrangements set up in advance (the taxi drivers you mention might be an example if that's their arrangement), but I do have an objection if people think that they can refuse to carry out their ordinary, expected duties, without even compromising. I think that if that's what they want they really she be in another job.

The bus driver in this case is kind of in a grey area because it really was something unusual (and newsworthy, etc), though in a ss sense within the ordinary requirements of the job. I think that the way the company acted was pretty reasonable but a lot of people discussing this over on Richard Dawkins' site think the company was too soft.

I am an agent of choice.

Increase it as much as possible and educate those who are left to choose to the best of available methods.

With those choices come consequences.

Also, know that not choosing is also a choice and the consequences which come with that path should be treated as such. There is no crying in baseball...Sometimes.