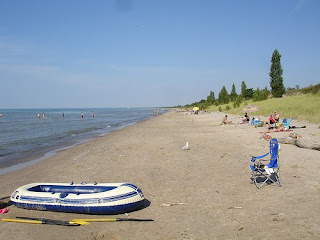 I was at Pinery Provincial Park last week where I spent most of my time on the beach. The Pinery is on the south shore of Lake Huron and is one of Southern Ontario's best kept secrets.

Like any large body of water, Lake Huron can be unpredictable. Even water that's as still as glass can pose dangers. The wind often blows into the lake causing a deceptively dangerous situation.

It was on such a day last week that the wind taught me a lesson about indifference and how quickly selfishness and apathy can catch up to you. Nothing too dramatic, mind you, just a nice Buddhist moment that reminded me how karma can bite you in the ass in unpredictable ways.

Over the course of the day I watched a number of inflatable items blow into the lake--much to the dismay of their owners who couldn't swim fast enough to retrieve their drifting items. One by one their floating beach gear would disappear over the horizon; it was like watching helium balloons rise up into the sky until they ventured beyond sight.

At one point I noticed an air mattress very close to me blow into the water. There was a man in his early 20's next to me who had just finished his swim and was putting on his socks and shoes. I assumed it was his mattress. He didn't notice that it was floating away.

And for some strange reason I stood there on the beach paralyzed in indecision. I was unable to act. All I had to do was shout out to him that his mattress was floating away, but I couldn't muster a voice. Or I could have swam for it myself, but I just stood there transfixed by the sight of the mattress getting farther and farther away.

As I stood there twiddling my thumbs it got so far away that I figured it was hopeless so I decided to ignore the situation outright.

But I was shocked at my indifference and my inability to help when I could have easily done so. I wondered what the hell was wrong with me.

And then a realization hit me: that wasn't his mattress, it was my mattress! It had flipped over and I didn't recognize the color.

In that instant I had suddenly become the other.

And I was struck with the feeling that this served me right--that the cosmos had conspired to teach me a lesson about apathy, inaction and the failure to project beyond one's self. My own indifference about helping another person had actually cost me my own air mattress.

Well, almost. I dove into the water and swam like hell to get it, laughing all the way at the absurdity of the situation.

I liked this story very much. You are a good writer :-)

That was worth a chuckle. And certainly a lesson, too.

Although I can't help but throw out one little criticism: isn't "the cosmos had conspired to teach me a lesson about apathy" a bit anthropomorphic? Phrasings like that could, if used too often and too carelessly, lead us to think that we're entitled to receive such valuable lessons.