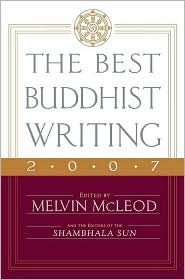 I'm currently reading The Best Buddhist Writing 2007, a compilation that was put together by Melvin McLeod and the editors of the Shambhala Sun. I cannot recommend this book highly enough -- very engaging and hard to put down.

Containing writings that are variously wise, witty, heartfelt, and profound, this is the fourth volume in an annual series that brings together the year’s most notable literature inspired by Buddhist philosophy and practice. Selected by the editors of the Shambhala Sun, North America’s leading Buddhist-inspired magazine, the pieces in this anthology offer an entertaining mix of writing styles and reflect on a wide range of issues from a Buddhist point of view. The collection includes writings by the Dalai Lama, Matthieu Ricard, Dzongsar Khyentse, Diana Mukpo, Thich Nhat Hanh, Charles Johnson, Susan Piver, bell hooks, John Tarrant, Natalie Goldberg, Khenpo Tsultrim Gyamtso, Thinley Norbu, Karen Maezen Miller, Pema Chödrön, and Norman Fischer, among others.

The fourth annual collection of best Buddhist writings, as in previous years, reflects breadth and diversity among English-speaking Western Buddhists. This collection is notable for the number of reflections on love—true love, mother love, a culture based on love—that offer refreshing change from more cerebral teachings on no-self. Even as he ages, venerable Zen monk Thich Nhat Hanh continues to pour forth teaching in his distinctive lyrical way, embodying what is meant by bodhisattva, a Buddhist saint. Dying mothers, cancer, crazy siblings, violent men in a prison yard—such concrete situations all provide food for Buddhist reflection and response. Not every piece is equally accessible, which is not a problem but a caution for some readers. Two essays of Tibetan textual commentary require patience and advanced knowledge. Anthologies are not always well served by including A-list writers; Alice Walker's essay is beautiful in parts but contains undisciplined rambling in other sections. It's interesting to hear less well-known voices, alongside those of the Dalai Lama or the American nun Pema Chödrön, who also contribute pieces. This series does a great service by highlighting views and themes as they modulate with each passing year.

Email ThisBlogThis!Share to TwitterShare to FacebookShare to Pinterest
Labels: buddhism

I am not a buddhist, but I am very interested in buddhist writings; I particularly like the magazine Shambhala Sun; I am sure you are familar with the magazine; I am suggesting that you might want to write an article about transhumanism and buddhism, which would be very useful for many along the way; they recently had an article on yoga and sitting practice, which was very informative
I most recently read The Essence of Zen: An Anthology of Quotations compiled by Maggie Pinkney; this book is full of wonderful, meaningful, and meditative quotes; although I read the entire book, I am far from finished with it, as I will have to read it again and again