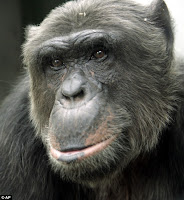 His name is Matthew, he is 26 years old, and his supporters hope to take his case to the European Court of Human Rights.

But he won't be able to give evidence on his own behalf - since he is a chimpanzee. Animal rights activists led by British teacher Paula Stibbe are fighting to have Matthew legally declared a 'person' so she can be appointed as his guardian if the bankrupt animal sanctuary where he lives in Vienna is forced to close.

An anonymous businessman has offered a substantial amount to cover his care, but under Austrian law only humans are entitled to have guardians.