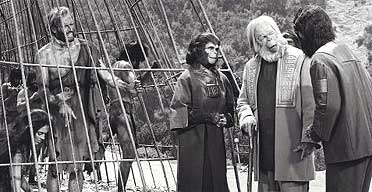 Holy, toldeo, now this is interesting and welcome news: Spanish socialists want to give apes human rights. The blurbage from the Spain Herald reads:

The Spanish Socialist Party will introduce a bill in the Congress of Deputies calling for "the immediate inclusion of (simians) in the category of persons, and that they be given the moral and legal protection that currently are only enjoyed by human beings." The PSOE's justification is that humans share 98.4% of our genes with chimpanzees, 97.7% with gorillas, and 96.4% with orangutans.

The party will announce its Great Ape Project at a press conference tomorrow. An organization with the same name is seeking a UN declaration on simian rights which would defend ape interests "the same as those of minors and the mentally handicapped of our species."

I'm amazed and disappointed to see how many transhumanists and techprogressives have failed to grok the significance of such an import step forward. Much of the inhibition against such a development is is the misconception about what is meant by equality in this context.

No one is suggesting that humans and apes are equal in terms of cognitive, linguistic or physical proclivities. I don't think the Spanish politicians who are pushing for the bill believe that apes should qualify for the next vote, or that apes should be counted in Spain's next census.

Rather, where 'equality' comes into the picture is where legal protections are concerned.

Many people in our politically correct society cling to the myth that there is already cognitive and psychological equality among all humans. This is nonsense. Yes, there are disabled persons, but a broad spectrum of capabilities exist that diversifies all "normal functioning" humans and so-called neurotypicals from each other.

For example, there are things (like math) that I simply cannot do, there are people on this planet who do virtually everything that I can do but much better, and there are things that I do that many people simple cannot; most of these disparities are due to fixed and intrinsic biological traits. Environmental determinism was a passé idea that died in the socially naive post-Hippie 70s and replaced by a more tempered view of human physiology that takes genetic, social and environmental considerations into account.

Yet despite these differences, whether they be genetically, socially, or environmentally imposed, most liberal democracies have established a charter of rights and freedoms that protect people regardless of their abilities. At its core, that is the very essence of a democracy and an excellent foundation for a just society. Today, as the Great Ape Project attests, there's issue as to who we should include in our society -- much like there was an issue with allowing Blacks and women into society decades ago.

As far as apes are concerned, a strong argument can be made that they are cognitively and emotionally sophisticated enough as a species that we are morally bound to include them under the protective blanket of human rights. Obviously, the term “human rights” will not stand the test of time and will eventually have to be considered as “person rights.”

I find it profound to think that what we consider to be our sacred inalienable rights will soon be shared with other species. We will soon have a body of rights, freedoms and protections that will be applied and enforced across species boundaries. I hope to see other countries work to achieve similar bills and include other 'higher' mammals, including whales, dolphins, and elephants (among others).

This also bodes well as a precedent for transhumanism itself. The future of humanity may soon witness a kind of speciation, and it will be important for us to be in possession of an established set of laws that will protect different persons regardless of what might appear to be dramatic differences. It will also prove important when it comes time to acknowledge the personhood of machine minds.

For those in opposition to Spain's proposed bill, I offer this one last thought: when posthumans emerge, and should their advanced abilities cause them to be distanced from humanity to the degree that we are cognitively distanced from apes, that they will honour the laws we currently have in place that provide all persons with an inalienable set of rights.

All animals that possess consciousness deserve some rights. This could include animals as simple as chickens or even reptiles.

Though there are some basis regarding this campaign for the apes, I do not think their behaviors are known enough to guarantee that something like this will be taken seriously for now.