Sue Savage-Rumbaugh on the welfare of apes in captivity 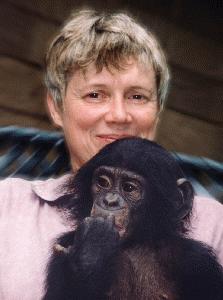 Tomorrow, on August 14, Dr. Sue Savage-Rumbaugh will be giving a presentation about the welfare of apes in captivity at a conference oraganized by the Animal Behavior Society. Savage-Rumbaugh, who is a lead scientist at the Great Ape Trust of Iowa (a world-class research center dedicated to studying the behavior and intelligence of great apes), is the first and only scientist doing language research with bonobos.

I recently cited her work in my animal uplift paper, "All Together Now", noting how the Great Ape Trust was not merely an excellent example of cultural uplift in nonhuman animals, but also a viable model for future institutions that may engage in more advanced uplift projects. As I stated in the paper: "...the Great Ape Trust model is an excellent starting block for not just cultural uplift, but for biological uplift as well. This endeavor is not meant to assimilate or “humanize” nonhuman species, but instead efforts that work to advance apes and their proto-culture. In this way, bonobos and other potentially uplifted nonhumans will ideally become autonomous decision making agents within a larger inter-species society. As the organizers of the Trust themselves state, the apes’ intelligence, communication, social interactions and cultural expression must be advanced respectfully, honorably and openly."

Dr. Savage-Rumbaugh was kind enough to send me an advance copy of her ABS ape welfare presentation, which is titled "Welfare of Apes in Captive Environments: Comments on, and by, a Specific Group of Apes." Her thesis takes a look at a very important issue that pertains directly to the problem of human and nonhuman social and cultural stratification. And as the title suggests, she will be presenting material on behalf of the great apes themselves.

Specifically, Savage-Rumbaugh argues that zoo and other ape confinement administrators, despite their best intentions to create idyllic environments for apes in captivity, have in reality created the illusion of appropriate care. "It is a manufactured 'happy ape world' based on a false dichotomy between ourselves and apes," she writes, "It is like something akin to saying that a human prison be a wonderful place if we would but provide prisoners with bedspreads, televisions, and beer." These illusions, she argues, "are constructed by our peculiarly scientifically informed western view of what apes ought to be, rather than what they might have the potential to be." Moreover, these are illusions we wish to see, she says, because they cover "more difficult and deeper truths." What she is alluding to is the rampant speciesism that runs through Western society and the fear and confusion about what we should actually be doing about ape socialization and inclusion.

What zoo administrators have done in recent years to improve captive welfare in apes is focus on the need for social companions, adequate cage space, fresh fruits and vegetables, variety in the diet, and some type of 'enrichment' (i.e. the opportunity for apes to provision or forage for food). Efforts like these are attempts to mimic what the apes would encounter in their natural environment. Quite obviously these measures are vastly superior to small and sterile cages, but what Savage-Rumbaugh argues is that these new models make the 'visual aspect' of the bonobos environment more entertaining and acceptable to the viewer, namely visitors to the zoo and the administrators themselves. What is not happening, however, is taking into consideration what the apes themselves would prefer.

At the core of Savage-Rumbaugh's work is the conviction that these preferences can in fact be assessed. What she has uncovered in her decades of work studying the language capacities of the bonobo people is the profoundly powerful way in which they can comprehend and apply language (for an example of how she works, watch this video). Essentially, Savage-Rumbaugh claims we can simply ask the apes themselves what it is they want and need.

And this is exactly what she has done, and this is precisely what she intends to show at the ABS conference on August 14. Based on her questioning of the bonobos, here is a list of a dozen things that the bonobos claim to desire for themselves:

1. A recognition of their level of linguistic competency and ability to self-determine and self-express through language by the humans who keep them in captivity
1. To travel from place to place
2. To obtain their own sustenance
3. To plan ways of maximizing travel and resource procurement
4. To transmit their cultural knowledge to their offspring
5. To be apart from others for periods of time
6. To develop and fulfill a unique role in the group
7. For the group to split apart and to come together to share information regarding distal locations
8. To maintain life-long contact with individuals whom they love.
9. To go to new places they have never been before
10. To live free from fear of human beings attacking them
11. To have food that is fresh and of their choice.
12. To experience the judgment of their peers regarding their capacity to appropriately carry out their role in the social group, on behalf of the good of the group

Acknowledging the inevitable disbelief and hostility that will confront her findings, Savage-Rumbaugh says, "I did not invent these items on my own." She writes,

These items represent a distillation of specific kinds of things that these bonobos have requested repeatedly across the 4 decades of research with them. When these requests are met, to the degree that I have been able to do so, new and unexpected competencies have emerged in this group. Many of these competencies remain to be documented in sufficient detail. Keeping up with their emergence has proven to require a full-time effort in and of itself. Providing bonobos with these kinds of opportunities has not fit comfortably within the standing cultural views of what one ought to do for apes and thus has constantly resulted cultural clashes which express themselves in reviews of submitted articles, reviews by groups ostensibly trying to protect animals (by keeping them extremely restrained), by funding agencies, by state and federal requirements and by peers. The need to design and maintain a proper environment for these bonobos has become an all consuming task, because our culture beliefs are not structured to accord them the kind of world they require.

The real issue, she says, is not ‘What are they like and how should we treat them?’ The real issue is ‘What do we want to permit them to become?’

I applaud the work of Dr. Sue Savage-Rumbaugh and the Great Ape Trust who I believe are doing remarkable and truly progressive work on behalf of all the great apes.

Wonderful insights are presented by Savage-Rumbaugh. Her leadership in a new approach to the understanding of apes is impressive. It should make everyone think deeply about their poritions and values regarding the apes and animal life generally. She merits support!

Athena Andreadis said...
This comment has been removed by the author.
3:53 PM