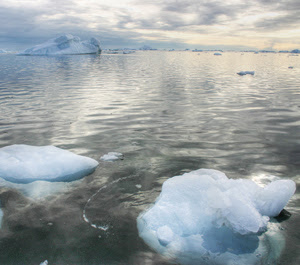 The unilateral streak that has come to define the neocon Bush administration has once again reared its ugly head, this time at the United Nations talks on global warming. The gathering, which is bringing together the leaders of over 80 countries, is geared around efforts to combat human-instigated climate change.

The talks come several days after an announcement that melting temperatures this summer shrank the Arctic Ocean's ice cap to a record low and that the fabled Northwest Passage is now open.

George W. Bush, however, will not be there, and instead plans on convening his own meeting on how to address global warming. His hope is to avoid global treaties and anything that could give the United Nations jurisdiction over the issue.

The U.N. continues to exist as a toothless, and subsequently, useless entity -- thanks mostly to the U.S.'s utter disregard for the institution and all those countries who use this an excuse and inspiration to go it alone.

Meanwhile Canada's Prime Minister Stephen Harper is at the global warming talks, but his presence is about as useful as Bush's no-show. His own environmental advisory body, the National Roundtable on the Environment and the Economy, directed sharp criticisms at the Conservatives for their climate-change strategy and accused them of overestimating what the plan will accomplish. The report claimed that Harper's plan is vague, uses questionable accounting methods and exaggerated greenhouse-gas cuts it would result in.