Ahmadinejad speaks at Columbia University instead of being arrested 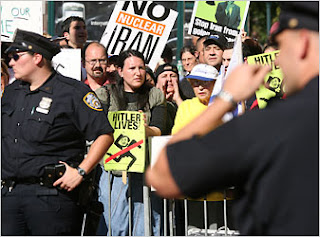 My jaw hit the floor when I learned that Iranian President Mahmoud Ahmadinejad delivered a speech at Columbia University today.

This lunatic should have been arrested the moment he stepped off the plane.

On what charges, you might ask? Okay, let's quickly go over his track record. Ahmadinejad's Iran has:The world we live in is insane. I can't believe this guy was allowed to walk around Columbia's campus today. He is one of the world's most dangerous geopolitical figures and deserves nothing less than a cold jail cell.

Ahmadinejad is not a nice guy, but
a) he's no worse than many other world leaders we regularly talk to, and
b) we have treaty obligations to let world leaders into New York to attend the UN.
c) he's not subject to US law, so under what basis are we going to arrest him?

You could make a better argument that Columbia shouldn't have hosted his speech, but personally I think universities should err on the side of more speech, not less. Let him speak and let his critics speak too,.

They should also be arrested.

>b) we have treaty obligations to let world leaders into New York to attend the UN.

>c) he's not subject to US law, so under what basis are we going to arrest him?

I agree with mtraven's comments.

You seem to be quite certain of your moral position on some issues to the point where you would like to force them on others.

I think force is counter productive and I think we give our leaders and governments far too much capability for force already.

I think we should all take a leaf out of Ghandi's book towards issues that we would like to be different.

I realize I might be reading too much into your posts.

No one deserves to go to jail.

Just stripped of power... that's all.

But the question is, would Iran just elect a new leader that continued on with more of the same?

Perhaps the Iranian people need more exposure to the Internet and international culture before they relinquish their self-destructive beliefs.

Uhm, yeah - send him off to Guantanamo. You know, the founding place of peace and justice...

I agree with mtraven and che completely. I personally don't like Ahmadinejad at all, but it would be plain nonsense to jail him in the US (or anywhere else than Iran).

# denied the Holocaust
# called for the destruction of Israel

These are opinions and speechs, not actions. Do you want to jail someone because he has "funny" opinions on the Holocaust?

Oh, the Global Government dream. How cool -only downside, it creates a state you can never go outside of. If your powerful UN goes crazy (what about an Ahmadinejad-ruled UN?), there's nowhere else you can flee. Not nice.

For a guy who seems to have the ability to think for himself, these kinds of comments are disheartening to read. Might as well be Little Green Footballs.

I too may not be a fan of Ahmadinejad's radical Islamic way's, but thats not reason enough to arrest him... Who's to say that democracy is THE only way, especially for a country in ME. I even agree with some of his statements about Israel. They have no right to be there and even if they did, they surly DON'T have ANY rigt to treat palestinians like they do...

I'm a long time reader, first time poster. I don't agree with what Ahmadinejad stands for but he travelled to the US where they have the right to free speech. Voltaire is attributed with having said, "I disapprove of what you say, but I will defend to the death your right to say it." I also believe that he would have had diplomatic immunity so he can't be placed under arrest.

Yes, I realize that Ahmadinejad has certain immunities as a traveling president, particularly as he's en route to the United Nations. My post was meant to bring awareness to the absurdity of his traveling privileges. Normally when dangerous criminals like Ahmadinejad exist on the political scene they are given travel bans, which essentially declares that *should* they travel they will be arrested by the host country. This is the current reality for such dictators as Belarus's Alexander Lukashenko and Zimbabwe's Robert Mugabe.

BTW, Ahmadinejad is not a diplomat and does not afford the same traveling privileges.

Finally, this is not a freedom of speech issue. He's not an public intellectual with academic liberties: he is a head of state and is bound by international laws to conduct Iran's affairs in accordance with recognized laws and conventions.

Allowing Ahmadinejad to make an as out of himself in a roomful of academics (and by proxy, the free world) helps to rob the fucking little bastard of his one claim to tyranny — the perception of an anti-Islamic, oppressive U.S. that doesn't allow the airing of Arab opinion.

There's nothing wrong with letting a fool look the fool. Besides, we here in America could stand to take the moral high ground by demonstrating that freedom of speech still has value. It is an inalienable right of our citizens, and, by extension, our guests — provided they break no laws nor incite rebellion.

Ahmadinejad is utterly impotent outside of his sphere of influence. A good strategy to further limit that influence would be to let the world see him for what he truly is: an opportunistic meglomaniac with no hope of a future in his region or any other. So, yeah, give him his 15 minutes on the world stage; history is already against him.

One last thing: the Israeli/Palestinain argument is one of convenience, exploited by certain leaders in the Islamic world. If a sustained peace could be achieved, it would take the wind out of a lot of autocratic sails. Well, except for possibly Osama, whose ideology is entirely theocratic in nature. Hmm, maybe we should catch him...

What enforceable law did he break? Have any other leaders (including the US president) broken those or similar laws?

How does one get to be a "public intellectual with academic liberties"?
What are the criteria, exactly?

I would to see more people of power put themselves to the test by entering academic fora. Imagine how George Bush would handle himself if he wasn't protected by an army of spokespersons and monarchy-like ceremonies.
Not that I like Ahmadinejad...he's a complete twit. But at least he faces the discourse directly, be as it may for propagandistic reasons.

Geez, folks -- I'm not opposed to this guy speaking at Columbia. What I'm opposed to is the fact that he's allowed to walk free.

But then, following that argument, I suppose the Iraqis would also be justified in jailing George Bush, were he to speak in Baghdad.

If not, logic as we know it has just collapsed ;)

I also whole-heartedly disagree with you George. He shouldn't be arrested and if the Columbia wants to let him talk, that is their own decision to make. Yes, he's not a good person, but the world is filled with them.

Glorious! Let us mete out furious vengeance upon meat-eating tyrants everywhere! May the stomp of our jackboots ring out against the bones of the rightfully dead! Onward to our buddhist-transhuman utopia of blood and steel!

Here's the best commentary so far on this, by Rick Perlstein: Bed-wetter Nation. No excerpt can do it justice, so go read the whole thing.

The majority of accusations in your list could also be made against the US and Western leaders involved in the war against terror and previous Cold War conflicts.

Columbia University claims they are America’s best and brightest?

Did you see the way they applauded Ahmadenijad?

They are just a bunch of filthy Little Eichmanns.

It is too bad that Cho Seung-hui didn’t go to Columbia University!

Why should Iran be subject to other people's laws as long as all the actions take place inside of their legally recognized boundaries? I don't want Iran's laws forced on me and we shouldn't force our views on them. He is a democratically elected leader, lets not forget. Americans should mind their own business. And why shouldn't they have nuclear energy or weapons? Israel does! Do you really think they would use them offensively? They would be destroyed in an hour. They want the DETERRENT and the NATIONAL PRIDE.