Crafting the practical case for life extension in Chicago 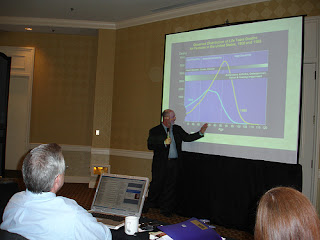 This past Monday July 23 the Institute for Ethics and Emerging Technologies conducted a short but intense one day symposium on securing the longevity dividend. The event was held at the picturesque Fairmont Hotel in and attended by about 40 passionate enthusiasts from a diverse set of backgrounds.

Rather than choosing to wax philosophical about the ethical imperatives in favour of life extension, the organizers of the IEET symposium specifically geared the event around the work of Jay Olshansky and his efforts to frame the discussion in more practical terms.

In other words, money.

Indeed, the case for a longevity dividend – the idea that prolonging life will save not just lives, but oodles of cash -- is beginning to take shape. As Reason science correspondent Ronald Bailey noted, “It's a way of rebranding the quest for extending human lives in a politically palatable way.”

Among the many alarming statistics presented by Olshansky, he noted that as a person ages their risk of dying doubles every 7 years. And as the expense required to keep people alive continues to escalate, society could be in for some serious economic trouble. Olshansky estimates that by 2030 the medical costs in the alone will reach a staggering $16,000,000,000,000.

To deal with this pending crisis, Olshansky suggests that we need to keep people healthy by working to develop more meaningful interventions in life extension, whether it be genetics, insights gained from the effects of caloric restriction, or the development of compounds with properties that appear to slow aging. Ultimately, the goal is to extend maximum healthy life span and drive medical costs down.

At the same time, Olshansky critiqued the tendency towards an explicit “anti-aging” sentiment. Quite interestingly, he sees aging as a positive and wisdom-endowing process. His goal is more modest than those of the transhumanists who which to eliminate death altogether. Instead, Olshansky urges that we should simply strive to extend maximize healthy lifespan as much as possible.

In terms of increasing life expectancy, both Olshansky and the transhumanists are on the same page; it is agreed that work needs to be done to reduce the ravages of aging as much as possible. It is also agreed that the word needs to get out. Money is the language of politics, and while they may not understand the intricacies of biogerontology or the ethics of prolonging life, politicians can most assuredly understand the impact on the bottom dollar. 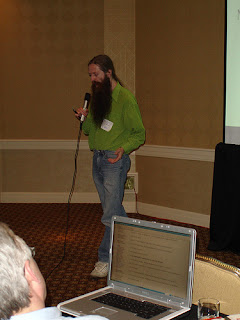 But not everyone at the symposium agreed with Olshansky. Gerontologist Aubrey de Grey, while supportive of Olshansky’s work, was skeptical that a focus on the longevity dividend would result in a decrease in medical costs. As de Grey argued, there will still be costs -- if not considerable costs -- even in a world in which senescence has been greatly retarded. The goal, says de Grey, is to work towards the development of anti-aging interventions intended to eliminate death altogether.

Regarding public support, de Grey urged that more PR work needs to be done on his behalf; Aubrey wants better funding. He mentioned his supreme disinterest in politics and politicians, who he believes are merely looking towards the next election and pandering to the needs of their constituency. The trick, he says, is to sway these constituencies on the side of life extension.

As for de Grey’s talk itself, it was vintage caffeine-inspired Aubrey -- but this time he was also full of piss and vinegar. It was angry Aubrey, on the offense and lashing out at those critics who he accused of being dismissive of his work out of sheer incredulity and little else. He eventually returned to more substantive issues by addressing Olshansky’s longevity dividend and his own work, including his upcoming book, Ending Aging: The Rejuvenation Breakthroughs that Could Reverse Human Aging in Our Lifetime.

Also speaking at the event was economist David Meltzer who dazzled attendees with abstract renderings of economics equations and high economic concept. Anders Sandberg worked to frame more meaningful policy scenarios as they pertain to life extension; Ronald Bailey spoke of the political economy; I presented a summation and taxonomy of arguments both for and against life extension; and James Hughes demonstrated how coalitions should be built for anti-aging science and medicine by turning the symposium into a collaborative workshop.

The life extension community continues to take strides by expanding and attracting more effective allies. And by doing so it is acquiring a powerful arsenal of ethical, legal, political and economic rationales to support the claim for longer life.

The case for radical life extension continues to mature. 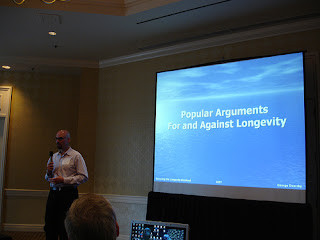 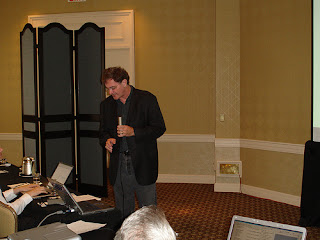 The fact that you have to appeal to the bottom line of industries, is a sign that they, and not voters, actually constitute the constituencies of politicians in the present architecture.

It's pretty clever, from a tactical perspective, but what happens when longevity succeeds in catching on with politicians through the tried-and-true technique of monied lobbying, and still leaves the essential corruption of the system of influence intact?

Suppose those working to reform campaign finance and representation WERE able to put the influence of lobbyists and wealthy industries on a shorter leash. Putting the longevity eggs in the money basket would then put us at odds with those seeking more democratic meta-level reforms, simply because of our choice of short-term tactics.

I don't fault the tactic in and of itself, but I can't help thinking that the fact that such a shift in focus to the dollar sounds like such a good idea is evidence that there is something larger wrong with our democracy that needs to be prioritized.

n8o: this was actually discussed at the symposium, though not in any great detail; perhaps this is something we should better articulate and explore as the IEET moves forward and better situates itself in the biopolitical spectrum of democracy.

George, were there any industry representatives there? People from biotech or pharma companies? I would be curious to know if they had enough interest to attend and, if not, why.

You have indicated the many rows of empty chairs. However, almost all chairs, about a hundred were being filled in cyberspace. Perhaps thousands if you count in the IRC, webcast viewers besides second life.

This was a big dissapointment with several people who could not attend physically. It is also a dissapointment for an event about the future which still confines it's far reaching ideas behind brick and mortar.

I hope there will be a post conference compilation with videos, presentations,transcripts like in TV06.Your blog with pictures was the only substantial one I could find till now.Are there others ?

Otherwise, the conference would only be just another conference about the future.