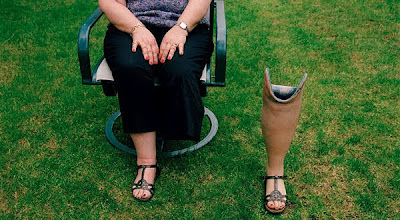 As prosthetic limbs become more sophisticated and realistic, amputees are increasingly wanting to take full advantage of what cutting-edge technology has to offer. But in order to do so, some are having to make a very difficult decision. From Alexis Okewo of the New York Times:

Approximately two million people in the United States are living with amputations, according to the Amputee Coalition, a national advocacy group. But as artificial limbs are infused with increasingly sophisticated technology, many amputees are making a once-unthinkable choice. Instead of doing everything possible to preserve and live with whatever is left of their limbs, some are opting to amputate more extensively to regain something more akin to normal function.

Occasionally this choice is made by someone with a missing hand or arm. But more common are amputations below the knee, which permit patients like Ms. Kornhauser to take advantage of robotic and fleshlike prosthetics.

Bionic, or lifelike, prosthetics with custom skins, motors and microchips that replicate natural human motions are edging older models out of the market. The South African runner Oscar Pistorius, a double amputee, has even been accused of having an unfair advantage over competitors because he runs on J-shaped carbon fiber blades.

Amputees “are realizing they can do everything that they did before,” said Amy Palmiero-Winters, 39, a celebrated ultramarathon runner who lost her left leg in a motorcycle accident when she was 24. She now works at A Step Ahead, a Long Island prosthetics clinic. “They look at people today and see the different things that they’re doing and how it’s more out in the open and accepted.”