Do "advanced" dinosaurs rule other planets? Uh, no. 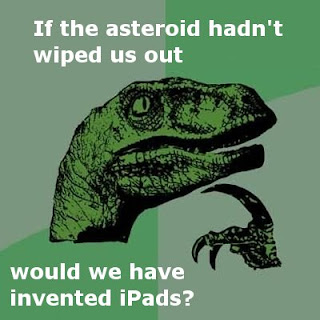 There's an article making the rounds from the American Chemical Society asking, "Could "advanced" dinosaurs rule other planets?"

It's a provocative title, but strangely, the article has virtually nothing to do with the question at hand, and instead addresses the issue of DNA/RNA left-right orientation and the problem of chirality in origin of life studies. It's kind of a bait and switch in which the researcher, Ronald Breslow, is clearly trying to draw attention to his work on the subject.

But to answer the question...in a word...no. And here's why:

A number of people speculate that, had an asteroid not wiped out the dinosaurs, they would have eventually spawned a species that would be human-like, and subsequently follow a similar developmental trajectory to our own. Unfortunately, however, this assumption misses two very crucial points: They didn't and they couldn't.

Dinosaurs ruled the Earth for an astounding 265 millions years. And within that time they produced nothing like our species.

The reason was that they couldn't. The environment wouldn't allow it. The age of the dinosaurs was marked by the presence of super-predators -- you know, T-Rexes and Spinosauruses -- nasty buggers like that. Super-predators force prey animals to adapt accordingly and along a very narrow band of morphological possibilities. In other words, animals back then needed to be able to run like hell or somehow fend for themselves. Back then it was all about physicality; intelligence had very little sway against the likes of super-predators.

Our species, on the other hand, was given the elbow room to evolve thanks to the absence of these super-predators. Sure, we still had nasties like saber toothed tigers, but nothing that compared to the dinosaurs.

The asteroid was a kind of reset button on evolution. We can be thankful for it, otherwise we wouldn't be here right now.
Posted by George at 4/13/2012

AFAIK the only thing human created that will still be around in 100 million years (assuming we were wiped out tomorrow) are the moon landing sites.

It seems to me that it is MORE likely that intelligence would arise in a world of so-called 'super-predators' (even though Spinosaurus aegyptiacus was outwardly geared towards a more piscivorous lifestyle, and Tyrannosaurus rex is not perhaps best described as a champion sprinter, as well as most probably specializing in larger prey items such as advanced hadrosaurs).

Isn't it more likely that an animal would need to use its brain more effectively if there are other animals around that will challenge its survival/food source/social life? (unlike that most lovable bastion of extinction, the 'dumb-dumb' dodo, which had virtually no competition)

I'm not suggesting that an intelligent Dinosaur would ever take on the physical or mental characteristics of a human being, (as the hideous 'Dinosauroid' suggests), but perhaps there was a time in the Mesozoic when certain conditions were right for some small form of sentience to exist. Who knows..

Hi, I am a big of George's writing and have written an article in response to this one: