"This is your body speaking. You're about to have a heart attack." 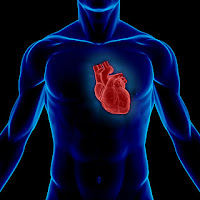 Not that you'd ever want to get this sort of message, but the AngelMed Guardian, an implantable medical device that's currently undergoing clinical trials, will alert users about a potential heart attack through a combination of vibrations, audible tones, and visual warnings.

In other words, it's going to let you know every which way and how that you're about to drop and that you better seek medical attention asap.

Indeed, according to Mary Carol Day and Christopher Young of The Human Factors and Ergonomics Society, what makes this particular device distinctive is its combination of alert modes. Vibrotactile (vibrating) alarms are often used in operating rooms or ICUs, but very little research has focused on their potential as a self-monitoring device for patients. And some auditory alarms are provided with selected implantable heart defibrillators, but many patients are unable to hear the alarms, particularly as they're elderly.

A vibrotactile alarm, on the other hand, has two major advantages. First, the implanted device can't be left behind like a portable device. And second, a vibrotactile alarm from the implanted device is more likely to be felt than an auditory alarm is to be heard because, for example, the patient may be wearing heavy clothing, has hearing loss, or is in a noisy environment.

The AngelMed Guardian offers two levels of alarm urgency: A high-priority alarm indicating that the user may be having a heart attack and should call 911, and a low-priority alarm indicating that a condition has been detected that requires a doctor visit within 48 hours. The alarms are provided by an implanted medical device, similar in size to a pacemaker, that is placed in the upper left chest, plus an external device, similar to a pager, that emits an auditory alarm and flashes a red or yellow warning light.

If the Guardian is approved for sale by the FDA, its developers hope that it might be extended in ways that will change the way the patient interacts with the system as a whole.
Posted by George at 4/13/2012

At first I thought, how could someone not know they're having a heart attack? But I guess they aren't all the immediate chest crushing experiences we see in movies.

From the original article - "Although widespread education campaigns describe the warning signs of a heart attack, the average time from the onset of symptoms to arrival at the hospital has remained at 3 hours for more than 10 years."