Thomas White: "Whales are people, too" 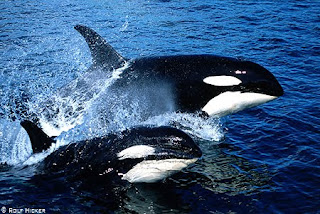 Thomas I. White, the author of In Defense of Dolphins: The New Moral Frontier, has penned a must-read article in ABC Environment. White argues that there is now ample scientific evidence that capacities once thought to be unique to humans are shared by dolphins and whales. "Like humans," he writes, "whales and dolphins are 'persons'." And by persons he means that they are self-aware beings with individual personalities and a rich inner life; they have the ability to think abstractly, feel deeply and choose their actions. In addition, their lives are characterized by close, long-term relationships with conspecifics in communities characterized by culture. "In short," he says, "whales and dolphins are a who, not a what."

Thankfully, White notes that research on marine mammals is on the wane:

More significantly, a small group of experts who met at the Helsinki Collegium for Advanced Studies in the spring of 2010 to evaluate the ethical implications of the scientific research on cetaceans concluded that the evidence merited issuing a Declaration of Rights for Cetaceans: Whales and Dolphins. This group included such prominent scientists as Lori Marino and Hal Whitehead. Particularly important in this declaration was the recognition that whales and dolphins are persons who are "beyond use". Treating them as 'property' is indefensible.

Despite this, notes White, whales and dolphins are still being used for entertainment purposes at marine parks:

It is, of course, no surprise that the managers, employees and researchers affiliated with enterprises that make money using captive whales and dolphins do a poor job of being sensitive to the ethical implications of the progress of marine mammal science. These people are caught in a classic conflict of interest. On the one hand, they have a duty to protect the welfare of the cetaceans in their care. On the other hand, their jobs and careers depend on keeping the current business model intact for as long as they can.

Predictably, when there's money on the line, people will not only rationalise all sorts of actions, they'll even believe their own rationalisations. As we saw with the 2008 economic meltdown, individuals running banks and financial institutions on Wall Street were so blinded by a desire to maximise profits that they not only ran their own companies into the ground, they put the economy of the entire planet at risk. When we humans are so ready to turn a blind eye to actions that risk hurting ourselves for the sake of profit, it comes as no surprise that we'll readily ignore the possibility of hurting other intelligent species.

All of the organisations that use captive cetaceans say they are strongly committed to the welfare of the whales and dolphins under their care. Given the ethical challenges that have come from the progress of scientific research over the last 30 years, the question is whether these organisations will respond appropriately on their own or whether they will increasingly become the targets of controversy and consumer boycotts.

So, despite the increasing evidence re-affirming our suspicion that whales and dolphins are persons, we are left with an interesting—but troubling—conundrum: "If moving away from using captive whales and dolphins is both the right thing to do and more profitable than current practices," asks White, "why isn't it happening?"

I encourage you to read the entire article. And while you're at it, support the Institute for Ethics and Emerging Technology's Rights of Non-Human Persons Program.